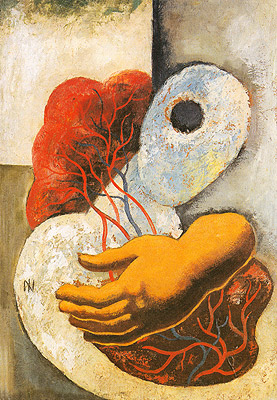 A week ago, a little after 3am,  I stood up from my laptop, pulled off my robe, took off my shirt, grabbed the scissors that had been calling to me from my desk for weeks, and  I cut my upper left arm exactly twenty times. It was the first time I’d cut in years, and as far as self-harm goes, it wasn’t so bad. In my early twenties,  I would cut myself over 100 times—arms, legs, torso. This time I got away with twenty. Not my best work by any means. Nothing that would leave a scar. Not really.

A week ago, cutting was an orgasm. The keen edge of a blade brought me back to the here and now. It’s private. That’s why I cut in places no one can see—until they do.

Early in our marriage, Margaret found my stash of bloody paper towels.

What is this? She wanted to know.  What could I say? I rolled up my sleeves and showed her. She cried, and I didn’t cut again for years.

A week ago, I told Margaret that I thought I needed to go to the hospital. I was shaking and on the verge of tears. I’m not much of a crier. It got her attention. I was standing in my bathrobe and Pikachu hat that tends to reduce my anxiety by a minuscule amount.

I think I need to go to the hospital, I said. Margaret stood there a moment, taking me in. Thinking.

All they’ll do, she said, is keep you full of drugs for three days and let you out. She had a point.

Maybe you start back on your meds and call your shrink on Monday.

Okay, I said. Later that night, I went through rapid, severe mood swings—mania, rage, euphoria, depression and back again. That night, I cut myself twenty times on my upper left arm. END_OF_DOCUMENT_TOKEN_TO_BE_REPLACED

It Ain’t No Lie, Baby

My first boyfriend killed himself. We didn’t call ourselves boyfriends, but we went to the movies together, went to dinner together, and had a lot of sex. Part of the reason we didn’t call ourselves for what we really were is that it was the ’90s and things then weren’t what they are now. More than that I think, even though he was out of the closet, was my insistence that I wasn’t gay. And I wasn’t and am not. I was a bit of a coward, though.

I didn’t realize at the time that there was another option or, as it turns out, countless other options. And who knows, maybe I’m being presumptuous to think that he would have wanted to call me his boyfriend. He was beautiful and wild and unpredictable. He had a lot of suitors. Still, I do sometimes wonder if things would have been different if I, at that time, could have just went all in so to speak.

It wouldn’t be until several years later that I came out to my friends as a bisexual male—something seemingly as rare as a unicorn. That’s when things got weird. Some of my friends shrugged, and said, “So?” That was the best response possible, and I appreciate each and every one of them. Others weren’t sold on the idea. How is that possible, they wondered, you’re married to a woman.

The reaction from my gay friends could be even more baffling. I heard the old standby, “Bi now, gay later” plenty. That one didn’t bother me at first because so many gay men I knew at the time did go through a period where they told people they were bisexual. They were just testing the waters. But, five years later, it started to get a little old. When I agreed to sit on a panel hosted by the university I attended as the “representative bisexual” most of the questions I got were variations of, “What does your wife think about you cheating on her with men?” My relationship is monogamous I said . . . over and over and over.

My oldest friend, a guy I grew up with, went to church with, love like a brother, had one of the hardest times believing it. His dad was a preacher. Once, when we were young, we were having a conversation about homosexuality in my bedroom. He had not yet come out of the closet and wouldn’t until his early twenties, but it was something we’d talk about now and again. Maybe he was seeing how I would react, but I believe him when he says he just hadn’t been able to admit it to himself yet. We lived in a community that was violently homophobic.

“Look,” I said. “If I was gay I’d march up and down the street telling people. There’s nothing wrong with it.” I don’t know where I got this attitude. Not from my parents, any adult I knew, and certainly not from my hellfire and brimstone church. A church where, mind you, I made the mistake of wearing an earring. The preacher, looking right at me the entire time, went on a rant against homosexuality before saying, “When I was a kid, if a boy had an earring it meant one thing. It still means that today.” Amens all around.

I think what my friend meant when he told me I wasn’t bisexual was that he really expected, if I were, that I would be marching up and down the street telling people. I still love him. He’s incredibly accepting of who I am. We’ve been friends for thirty years. We Skype on Sundays to watch a classic episode of Doctor Who—a tradition started when we’d watch it Sunday nights on PBS. But, I digress. However, I wondered that if he, someone who knew some of the men I had slept with, didn’t buy it, why, I thought, would anyone else?

END_OF_DOCUMENT_TOKEN_TO_BE_REPLACED

A Conversation with Poet Daniel Crocker

If you ask Daniel Crocker how to get to Sesame Street, he’d point you toward a twisting road of manic depression, frustrated desires, and existential malaise. In his latest book, Shit House Rat, Crocker’s poetry reimagines the furry childhood icons of Sesame Street embodying torments and foibles as adult and human as the people whose hands are lodged up their muppet behinds. Cookie Monster is an addict, Big Bird has mania, Snuffy is the haunting specter of depression, and Grover’s anxiety led to a hell of a divorce. But, Sesame Street is only the starting point. Shit House Rat takes the reader to Leadwood, Missouri, Crocker’s rural, predictably lead polluted hometown, where he engages themes from his childhood to his adulthood, including mental illness, queer sexuality, poverty, and small town conservativism. I got a chance to ask Crocker about the appeal of dark humor in poetry, the struggle of growing up bipolar and bisexual in rural America, and most importantly, what exactly a “shit house rat” is.

Chase Dimock: The first thing your readers will notice about your new book will obviously be the title, Shit House Rat. I know that as you were working on this collection, you had some trepidations about how the title might be perceived by your audience. Where did you get the idea for this title and why did you ultimately decide to use it?

Daniel Crocker: I have trepidation when it comes to just about anything, so I try not to let it worry me too much as a writer. I really put myself out there, especially in this new book, and there’s always a lot of anxiety that comes with that. I did have some specific concerns about the title though. I got the idea from the old saying, “Crazy as a shithouse rat.’ I don’t know if it’s a Midwestern or southern thing, but I’ve heard it a lot growing up and even now. It’s a nice turn of phrase, really. So, I just took the last half of  the saying (kind of like I did with Like a Fish) and used it. My worry is that it’s a real putdown to people, like me, with a mental illness. I don’t want anyone with a mental illness to think I’m making fun of them at all. My hope is to take the phrase and subvert it. Own it.

Chase Dimock: I think it will be clear to anyone who reads your poetry that your goal isn’t to make fun of the mentally ill, but to use humor to explore the experience of mental illness. A lot of your poems are funny, and I mean literally laugh out loud funny, which is pretty rare for modern poetry. (Robert Lowell wasn’t much of a yuckster) Why are you drawn to using humor in your work? What does using humor reveal about the experience of mental illness?

Daniel Crocker: A lot of my early work is pretty dark and without a lot of humor. I don’t like a lot of that early work either (some of it still holds up). But, I always like humor. I thought I was funny. Eventually, I wrote a short story or two for Do Not Look Directly Into Me that were funny, and I quickly found that I loved doing it. I haven’t written fiction in a while, and it’s pretty clear to me now that I’m mainly a poet. However, once humor started seeping its way into my poems it was like a creative flood. I guess it was me finally finding a voice that was all my own. As Steve Barthelme one said to me, it has to be more than just funny though. I think that’s true. For me, the perfect poem of mine is something that makes people laugh when they first read or hear it, but then they find they are still thinking about it later because there was something deeper and darker in it as well. Which I guess if you think about it, it’s the two extremes of bipolar disorder mixed together.

I can’t say what dealing with mental health issues with humor means for anyone else, but for me humor is just a way I deal with a lot of things. When you have mental health issues, every day can be a struggle. With my own particular diagnoses–bipolar, anxiety, OCD, probably PTSD, I worry about a lot of things. I’m doing well on medication right now, but when I wasn’t little things like planning an extra ten minutes before work just to get out of the house just in case there was something you needed to check over and over. You never really know what kind of mood you’re going to wake up in, what your anxiety level for the day is going to be, etc. If you’re going to be successful in any way, you have to plan ahead for just about anything. It’s tough to commit to anything in the future because you don’t know where you’re head space is going to be on that day. Or, before medication for me, I might commit to a ton of stuff while manic and then regret it while depressed. I guess this is a long way of saying if you don’t have a sense of humor about things they can become overwhelming. At least that’s my go to stress relief. Jokes.

The good thing about writing funny poems is everyone usually likes them. The worry is if they are going to take them seriously or not. In Shit House Rat I’m using Big Bird as a symbol for mania and Snuffleupagus as depression. Will people buy it? I dunno.