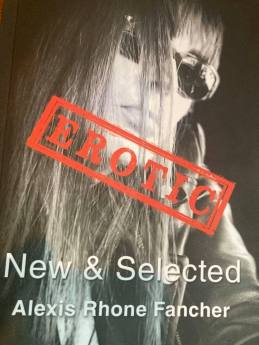 Some poets bring a very cerebral enjoyment. Think of the pleasure of watching John Ashbery’s mind work as he leaps from surprise to surprise, tossing out great lines as extravagantly as a child tossing candy from a parade float at Christmas time. A reader comes away from his work with a voyeur’s amazement akin to watching a skilled acrobat do trick after trick.

Alexis Rhone Fancher’s work offers a different enjoyment. Though her poems display tremendous skill, it’s the stand out nearness of her images and the relatability of her stories which are most striking. She writes about break ups and disappointing relatives, about first lusts and “the regret that hides outside.”

As the title suggests, this collection is broadly concerned with sex. There’s a lot of it, with men and women. The narrator seems aware of every desire and records them with vividness. Her often long titles are a lot of fun and prepare the reader for what’s ahead. For instance, the collection’s second poem is titled, “Tonight I Will Dream of Anjelica, My First Ex-Girlfriend, Who Taught Me the Rules of the Road…” The title ties into Angelica’s T-Bird and what takes place there, which is a lot. The narrator tells us, “I’ve always been driven to sin.”

What’s most exhilarating about this collection is the number of risks it takes. So many of these poems would not work for less talented poets. Fancher is fearless in her approach to subject and form. This collection contains prose poems and free verse. It contains litanies and Americanized haiku. Fancher reinvents them all.

One of the best poems in the collection, “White Flag”, is based on an Edward Hopper painting. Fancher adds a sensuality to the occupants of Hopper’s world. Loneliness is what can come the night after a hook up or during the weeks after a break up. She tells us “No one paints loneliness like Edward Hopper paints me, missing you, apologies on my lips.”

Thankfully, no apologies are needed for these stunning, life-filled poems.

About the Author: Mike James makes his home outside Nashville, Tennessee. He has published in numerous magazines, large and small, throughout the country. His 18 poetry collections include: Leftover Distances (Luchador), Parades (Alien Buddha), Jumping Drawbridges in Technicolor (Blue Horse), and Crows in the Jukebox (Bottom Dog), He has received multiple Pushcart and Best of the Net nominations.

Mike James reviews Beautiful Aliens: A Steve Abbott Reader and Have You Seen This Man? The Castro Poems of Karl Tierney