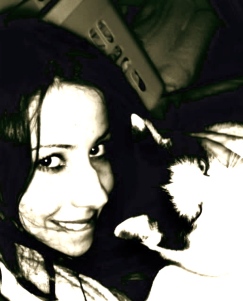 I must have been lazy like tepid water.
I have become a chaise lounge in the hallway
asking what will happen if the big one comes,
if it will destroy my relationship with the past. Will it?

Four beautiful women play ping-pong in my ears
and someday I will turn to watch them suffocate
into their boyfriends’ arms like leer jets,
the way they get caught between two peaks

because the pilots forgot, were lost in the snow already
before their feet even hit the ground.
My mother was my cellmate in my first life.
In this one, my mother is my mother in a cell,

her hands divided into quadrants,
an example of what melodramatic could never mean.
Her and I have become friends at the gym
where we use our eyes to signal that we are the same.

Four women talk about boyfriends like they were diets,
like we haven’t been to the same dream a hundred times.
My mother wishes they would exchange hairstyles with her,
that they would hand her gold flecks under the covers.

Today’s poem previously appeared in ILK journal and appears here today with permission from the poet.

Eszter Takacs is a Hungarian-born poet who has spent most of her life living in Los Angeles and a little bit of it living in Maryland, Hungary, and France. She is currently a first-year MFA candidate and Graduate Teaching Assistant at the University of Arkansas in Fayetteville. She paints, plays the flute, tinkers with digital cameras and knows more than you expect a poet to know about cars after spending the past six years working in the automotive industry. One day she hopes to live in a city like Paris. Or just Paris. She has a photo blog that really needs to be updated more often. Her poems have appeared in elimae, ILK Poetry, The Dirty Napkin, Mixed Fruit, Birdfeast, Utter, and elsewhere.

Editor’s Note: If words are glistening malleable threads then Eszter Takacs is a spider. At home within them, manipulating them, and anchoring her creation to the world which surrounds it. In today’s poem Takacs draws on popular culture, mother-daughter relations, and a kind of existentialism that straddles the spheres of the feminine and the personal. I mean it as a compliment to the poet’s talent and unique vision when I say: What a tangled web she weaves.