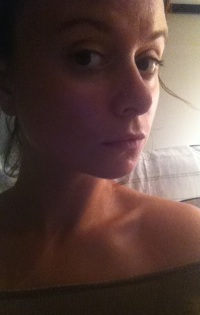 from HINTERLAND + HEX
By Emmalea Russo

say: women in
your family
are witches

“supposed to be there”

but what we dig out space for

couldn’t anyone
paint a seed
isn’t it a circle

Today’s poem previously appeared in ILK journal and appears here today with permission from the poet.

Emmalea Russo is a poet and visual artist. Recent work has appeared in ILK Journal and Wicked Alice and is forthcoming in Ambush Review and Yew Journal. She lives in New York City.

Editor’s Note: I was first drawn to today’s poem by Emmalea Russo’s invocation of women witches. Those women who are cloaked in the magical and the incantatory, who suffered historically at the hands of Christianity, patriarchy, and empire, and who have been avenged and reclaimed by feminism and the Feminine in modernity. But after reading and re-reading today’s piece, after allowing its seeds to sprout in realms both conscious and subconscious, I now know that the poet sums up the experience of this poem best when she writes, “how what’s under will seep through.”