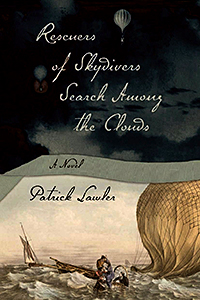 Not long ago I saw a photo collection: Two brothers who took one picture every year in the same month, the same pose. They did this for decades, their entire lives distilled in these portraits. In 1994 they wear matching sweaters. In 2001 they look unkempt. Each photograph asks the onlooker to imagine what happened between each set of images–why did he lose weight, why wasn’t he smiling more. The positioning grows expected, even stale: older brother here, younger brother here, chair, table, lamp. Except, as we grow closer to the now, we see the paint has started to chip on the wall, and the lampshade was replaced, and somewhere, somehow, two young boys grew into men.

The framework remains unchanged, the details shift in the smallest of ways. But the overall effect creates nostalgia for suggested things, unseen things, palpable just beneath the surface.

It’s a difficult thing to accomplish, and it’s what Patrick Lawler’s first novel, Rescuers of Skydivers Search Among the Clouds, spends its pages exploring: The spaces between and underneath. The economy of storytelling. The onus on the viewer to participate in unpacking questions, and meanings, and movements.

Composed in a series of tightly wrought chapters–some a mere three sentences long–the story follows a young narrator and his family, in a small, anonymous town, with small, anonymous descriptors. They seem to both live in and hover over the landscape. The important things are named and renamed, redefined as they change–or as the narrator’s perspective on them changes. Those named things become the notable landmarks of the novel, their evolution or transformation or renaming emblematic of the narrator’s own journey and perspective on those around him.

Lawler says it explicitly: “Our stories repeat themselves endlessly around us–ultimately revising who we are every time.”

It feels at once like reading the same chapter over and over again with certain words replaced, but this heightens the effect of those changed words and phrases. The same photograph, with things just a little older, a little changed. We begin in “the year they named the streets after the elements,” moves into “the year my parents began speaking in a strange language” and “the year we practiced for emergencies.” By the end, the repeated frameworks have become as nostalgic as old photos — in them, we see the history of all the shifts the narrator and the reader have together experienced. And in the rare deviations, we see the narrator looking beyond, departing: “‘This is where we are,’ he said, but his mouth was filled with uncertainty.”

The reader is forced to consider her own story in patterns and revisions, in names and malleable perspectives. I consider my own: The year that smelled of pool water and talcum powder. The year our neighbor’s daughter asked Santa for a penis. The year I drove in circles hoping to get lost, and failing. How best to crystallize time and experience in ways that approximate truth.

Rescuers of Skydivers Search Among the Clouds is a poet’s fiction, but it’s an artist’s fiction too—because the brevity and economy of language makes the act of reading this novel something beyond reading, because the entire work seems to meditate on how we live in words, how we cohabitate with them in our daily routines and use them as mile-markers for landscapes past. How eventually, we become symbols of the lives we live, and how the uncertainty of detail grants us room to explore.

Patrick Lawler, Rescuers of Skydivers Search Among the Clouds. University of Alabama Press, 2012: $15.95.

Jennifer Dane Clements received her MFA in creative writing from George Mason University, where she served as Editor-in-Chief of So to Speak: A Feminist Journal of Language & Art. She has been published in WordRiot and Nerve and her plays have been produced by Capital Repertory Theatre (Albany, NY), Creative Cauldron (Falls Church, VA), and others. Recipient of the John P. Anderson Award for Playwrights in 2004 and of a 2006 Fulbright fellowship to the Slovak Republic to teach English at the University of Constantine the Philosopher, Clements currently works at a theatre-service organization and serves as a prose editor for ink&coda. She lives with her husband in Washington, DC.