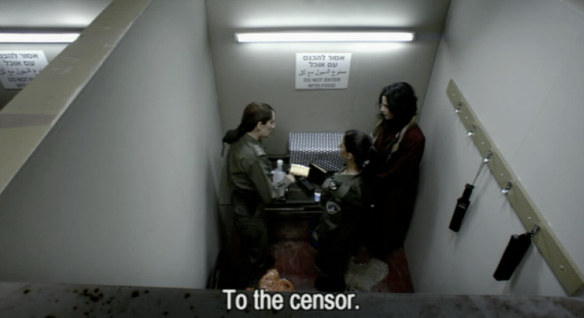 A few months ago, as I was looking for a good film streaming on Netflix, I came a across the Israeli film Close to Home (2005). I rarely watch Israeli films (after all Israel isn’t famous for its filmmaking industry) but after reading the little description one gets on Netflix, I was sold. The film was advertised as the story of Mirit and Smadar who “are both serving their mandatory terms in the Israeli army, charged with the mundane task of checking the papers of Palestinian civilians.”

After watching the very first scene of the film, I began to see the disconnect between the film itself and its advertisement. In that scene, a Palestinian woman, in a little booth slightly bigger than a fitting room, is asked by a female soldier (Smadar) to undress so she could be inspected. As a new soldier in the IDF, Smadar is accompanied by her commanding officer who instructs her on how to search the Palestinian woman’s belongings, from inspecting the woman’s lipstick to sending a random piece of paper Smadar finds in her purse to the “censor.” Right from the beginning, I realized that there’s nothing “mundane” about this. In fact, within a few minutes, with very little dialogue, the film shows how an extreme version of Foucauldian biopolitcs gets normalized. So much so, that when the commanding officer leaves the room, Smadar can only think about telling her officer that she was given the wrong boots, asking her how she should go about fixing this mistake.

In Israel’s Occupation, the Israeli Foucauldian scholar Neve Gordon (professor at the Ben-Gurion university of the Negev) uses Foucauldian biopolitics to examine the control mechanisms put in place in the Occupied Territories. He writes:

“By means of control I do not only mean the coercive mechanisms used to prohibit, exclude, and repress people, but rather the entire array of institutions, legal devices, bureaucratic apparatuses, social practices, and physical edifices that operate both on the individual and the population in order to produce new modes of behavior, habits, interests, tastes, and aspirations. Whereas some of the civil institutions, like the education and medical systems, operate as controlling apparatuses in their own right, frequently attempting to further the project of normalization, they are simultaneously sites through which a variety of other minute controlling practices are introduced and circulated.”

Thus, these mechanisms of sorting and controlling individuals always go hand in hand with a “process of normalization,” where individuals under control as well as those who control them become so accustomed to the situation that they can’t conceive of it being any different than what it is. The effect isn’t just a stalemate, but also a society in which institutions of control gain an almost holy status; they become off-limits to criticism.

What is interesting about Close to Home is that the film does conceive of a form of resistance to these mechanisms. While Smadar goes on with her work, doing precisely what the officer asks her to do, in the next booth, there’s a sign of resistance, as we see another female recruit arguing with the officer saying she refuses to go on with that kind of work. When she repeats her protestation saying, “I can’t, I can’t, I can’t,” her officer tells her, “you have no choice!” The soldier is later disciplined, but she proves the officer wrong: she does have a choice.

The film doesn’t dwell on this form of explicit, conscientious resistance. When Mirit and Smadar are assigned on patrol around Jaffa Street in Jerusalem (basically looking for Arab-looking pedestrians, asking for their ID cards, and then registering them) the focus shifts to mere boredom. While Mirit tries to do her job properly and register every Palestinian she sees, Smadar shows an interest in hanging-out, going into stores, chatting with people, etc. Smadar’s boredom and her neglect of her duty puts her in constant danger as she tries to avoid being detected by her commanding officer who drives around in a patrol car making sure the new recruits are doing their job properly. It’s clear that putting individuals under control and those who control them on the same plane would be simply wrong, but as the sequence of scenes where Smadar hides in alleys from her officer shows, institutions of control tend to swallow even those who run them.

This film, I think, falls short of explicitly criticizing the status quo. However, it does a great job in showing the efficacy of state apparatuses when it comes to normalizing extreme measures taken against a by and large civilian population. As Friedrich Dürrenmatt’s short story “The Tunnel” shows us, you only need to turn on the lights in order to make people forget that their train is going through a never-ending tunnel.