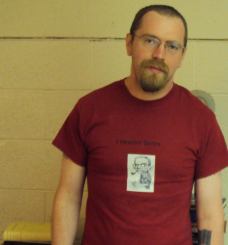 In the Mental Architecture of the Deceased

Five years ago, my father, grandfather, and I remodeled the bathroom in our family cabin. This was no luxury ski chalet or time share condo masquerading as a cabin. My great-grandfather built it himself in the 30s with the help of his five daughters and the boy scout troop he lead. Great-grandpa was not a master carpenter or plumber, so as we tore away the rotting drywall and jackhammered the cracked cement floor, we discovered an unexpected and unconventional layout of pipes. It was a map of kludges, improvisations, and applications of sheer brute force.

The more Dad and Grandpa studied how the pipes were fashioned and connected, the more it became clear that the success of the remodeling job became dependent on interpreting Great-Grandpa’s plumbing choices, and then predicting where the pipes would take us. They had to think like Great-Grandpa, and in the process, his cognition and imagination became reanimated. The pipes were a network of thought like the neural pathway of synapses in his mind. Debates between Dad and Grandpa over the next step in the project evolved into nostalgic appreciations of Great-Grandpa’s resourcefulness. They were once again enveloped in the creative vision of a man who built his own carnival rides and managed to keep a citrus grove thriving during the severe rationing of WWII.

If you clicked over here from Facebook or Twitter, you are probably wondering why I am beginning a remembrance of Okla Elliott with an anecdote about plumbing. My Great-Grandpa died well before I was born, so the experience of a man’s resurrection through exploring his handiwork was only secondhand. I could see it in Dad’s and Grandpa’s faces, but I could not feel it directly. Last August, when I took over As It Ought To Be following Okla’s untimely passing, I finally experienced this phenomena first hand.

As the new Managing Editor, I have been combing through nearly a decade of articles on As It Ought To Be. This has meant figuring out formatting, style, and organization as Okla had established them, and charting how he evolved in these ways. I’ve read through all of the posts Okla authored from the beginning of the site to his final article about Lent and its political and social possibilities posted just weeks before he unexpectedly passed. Just as the plumbing revived the spirit of Great-Grandpa for my father and grandfather, so too has editing and organizing As It Ought To Be kept Okla’s voice as a writer and thinker perpetually resonant in my mind.

Although I have known Okla since right around the founding of As It Ought To Be, one tends to forget how people were when you first knew them. You don’t always remember them as they ended either. Rather, you remember people for their established role in your life and you preserve them in that stance. You build a home for them in the structure of your existence, and when they die, that’s where they stay, beautifully enshrined in your memory as a witness and an ally. This would be the Okla of 2010-2014, when we were grad students drinking Bushmills, debating Sartre, and geeking out over the genius of Professor Cary Nelson. Like so many published here on As It Ought To Be and in many of his other creative endeavors, he encouraged me to expand my mind, amplify my voice, and apply my sense of reason and empathy toward engaging with the world’s social issues and political problems. END_OF_DOCUMENT_TOKEN_TO_BE_REPLACED