About the Author:  A past winner of the Jim Harrison Award for contributions to baseball literature, Tim Peeler has also twice been a Casey Award Finalist (baseball book of the year) and a finalist for the SIBA Award. He lives with his wife, Penny in Hickory, North Carolina, where he directs the academic assistance programs at Catawba Valley Community College. He has published close to a thousand poems, stories, essays, and reviews in magazines, journals, and anthologies and has written sixteen books and three chapbooks. He has five books in the permanent collection at the Baseball Hall of Fame Library in Cooperstown, NY. His recent books include Rough Beast, an Appalachian verse novel about a southern gangster named Larry Ledbetter, Henry River: An American Ruin, poems about an abandoned mill town and film site for The Hunger Games, and Wild in the Strike Zone: Baseball Poems, his third volume of baseball-related poems. 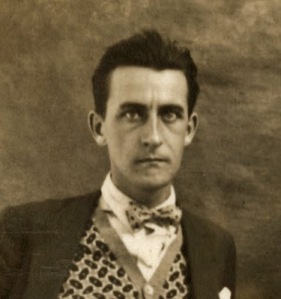 Robert McAlmon: A Lost Voice of the Lost Generation

A writer, publisher, and a connoisseur of the Parisian nightlife, Robert McAlmon was a fixture of the Lost Generation’s expatriate community in Paris in the 20s and 30s. McAlmon took Hemingway out to the bullfights in Spain that he would immortalize in The Sun Also Rises. He typed proofs of James Joyce’s monumental novel Ulysses, and due to the convoluted system of notes and addendums in Joyce’s manuscript, the voice of Molly Bloom that the first generation of readers received was actually McAlmon’s interpretation of Joyce’s. Through his publishing company Contact Editions, he was the first to publish works by such luminaries of the modernist movement as Gertrude Stein, Ernest Hemingway, William Carlos Williams, Djuna Barnes, H.D., and Nathanael West. Yet, his own reputation as a writer never reached the heights of those that he helped.

In past couple of decades, a few scholars have begun to rediscover McAlmon’s work and wrest it from the dusty margins of the archives. Three of his works of fiction (Village, Post-Adolescence, and Miss Knight) were republished in 1991 for the first time since the 20s and accompanied with a forward by Gore Vidal. McAlmon grew up with Vidal’s father in the Midwest and subtly hinted in the semi-autobiographical Village that he had an adolescent attraction to him. McAlmon’s memoir Being Geniuses Together and the newly rediscovered novel The Nightinghouls of Paris provide new insight, caustic commentary, and fresh gossip into the lives of the icons of the expatriate community. McAlmon was an avid gossiper and twice got into fights with Hemingway and F. Scott Fitzgerald for spreading rumors that they were pansies. McAlmon himself was a bisexual and although he never declared this side of his sexuality in his work, he nonetheless had brief flings with writers like John Glassco and Claude McKay among others.

Beyond the gossip, McAlmon’s work provides a rare glimpse into the lives of gay and lesbian writers and artists in the 20s. In The Nightinghouls of Paris, he portrays the relationship between Glassco and Graeme Taylor as the two young Canadian writers struggled to understand their attraction to one another in a culture that had not yet developed the vocabulary we have today for expressing and realizing these queer desires. He also fictionalizes the stormy relationship between Djuna Barnes and Thelma Wood, who was the inspiration for Robin Vote in Nightwood. Wood also makes an appearance as “Steve Rath” along with Marsden Hartley, and Dan Mahoney (the inspiration for Dr. Matthew O’Connor in Nightwood) in McAlmon’s collection of short stories Distinguished Air: Grim Fairy Tales, which chronicles the underground, queer cabaret culture of Berlin in the early twenties. McAlmon’s Berlin stories predate those of Christopher Isherwood by a decade and go much deeper into lurid details about drugs, prostitution, and the sexual dissidence of the expatriates who emigrated there to find a space in which their persecuted desires could flourish.

Below, I have included a few poems from McAlmon’s 1921 collection Explorations. In McAlmon’s first book, we see the young writer experiment with modernist techniques and themes. He revels in innovation, irreverence, and liberation from the stuffy verses and bourgeois sensibilities of the American tradition. In the first poem, McAlmon finds all three themes trumpeted through the chaotic notes of Jazz music. For McAlmon and his contemporaries, the Jazz Age was the post-war generation’s moment to radically reinvent American culture, even if they had to do it from inside the bars and bistros of Montmartre. In “Jazz Opera Americano”, McAlmon turns to stream of consciousness writing to keep pace with the frantic tones and rhythms of jazz music. For modernists like McAlmon, Jazz music was part of a wide-sweeping interest in primitivism—an artistic fascination with reinvigorating the west’s long repressed primal urges by appropriating non-western art to inspire cubism, surrealism, and other non-realist expressions. While well intentioned, this interest in the primitive came at the cost of stereotypical constructions of minority cultures, even though these artists thought they were promoting these cultures and saw their patronage of the Harlem clubs and the racially integrated bars of Paris as a sign of their racial inclusiveness. Though splintery with immaturity, these lines of poetry capture the urgency of the Jazz Age and the Lost Generation’s mantra to “make it new”.

One ancestor was a boar tusked dog wolf who howled mad
bayings at the moon—a lonely wolf—a vicious hound—a
sad brute—but a hell hound for noise :

Show us how you spend the money, spend the money.
God, man, feel my pulse, dear God—I’m a liar—it is
spurting Semitic Blood. Niagara rush in my veins with
Semitic caution. Show me how the money is spent. Magnifi-
cently gorgeously. Highcolors. Peacocks, humming-birds,
pheasants?  Nature, bah!  Spend big money.

In the line was a bull moose who bellowed mating calls
forever and ever, mate or no mate, he still had hungers deep
an impalpability not to be torn from him however he
bellowed—tom tom, a hunter’s horn, with a high yodel and
the rattle of a string of missionary teeth—all in the high
wind shriek and the moon splintered to white and ver-
milion orange dripping, green swirling and a dizzy spectrum
and I fainting but never fainted in a swirling vortex of
colored rhythms, uneven dissonant and tragic—wild, wild,
wild man, why are you shouting wild man?  Dance jazzo,
swirl me—my legs are buoys on an unsteady ocean of sound.

Young, young—hell no, not youth but energy, and what,
sweet blood tattooed Jesus, do we do with energy ?  Strong
rushing red blood—whatt’hell’s to be done with it ?  Desire ?
Growing sophisticated ? . . .  My thoughts will not be sup-
pressed however.  Set that to music, kid.  Reality.  Give
it a shivery tune.  Jewish, Chinese, East Indian.  Shakety
shake, shakety shake—Jazz, Jazz, whirl, wild women,
whirl.

Sucked into sound—thrilled voluptuous—and the waves of
rhythm carry me away, lap sensuous rhythm tongues about
me  soul-body-mind,  push me,  seduce me.  And I am
willing—anxious for the seduction, Jazzo, Jazzo swirled
and swung into the vermilion, the purple, swinging, sway-
ing, bending, tones—not in the feet moving, not in the body
bending, but in the blood leaping to a syncopated rhythm.
High recklessness. What comes after what comes after ?
Be careless. Sensible cautious—damnfoolishness—with a
half pint bottle for six—O yo ho—O yo ho—my ancestors
were savage brute vicious ones—the line’s diluted—
Crack—crackle—lights out—the bulls.

There is inestimable companionship in graveyards
Where the unavailing gestures of impotent hopes
Are sealed in earth overset with rock, and many dead
No longer fret and fume, but rest ;  while the knowledge
Of the life their corpses once have housed
Is breathing on the granite and the marble slabs
When the atmosphere about is conscious, if with vainest grief.

It’s a shame, kiddo, I’ll tell you it’s a shame that jazzy
people like Alexander, Cleopatra, Hannibal, and Henry
the Eighth should be annotated thus by a male pedagogue
who wears his winter underwear through June, and uses a
Pinkham pill for a laxative twice a week to keep his system
in order.

Geometry is a perfect religion,
Axiom after axiom :
One proves a way into infinity
And logic makes obeisance at command.

Outside of the triangle, cubes, and polystructures
There is restless pummeling, pounding and taunting.
The end is diffused into channels
Every step into eternity—and steps are endless.

He told me historic scandals :
Of how various queen-wives
Died of broken hearts
Because their kings
Had so many mistresses,
That Louis XIV. and that the XV.
He spoke of Le Duc Phillippe
Who painted his cheeks—
Also his eyebrows—
And rode in the streets
Regardful only of men,
Who poisoned his wife
Or in somewise rid himself of her.

If the guide would only be contemporary
With his scandalous information
He would not need to be a guide.

But he had rosy cheeks himself,
And perhaps a romantic nature.