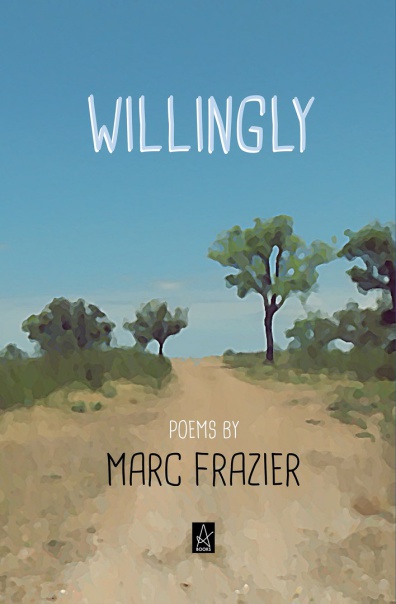 A Review of Marc Frazier’s Willingly

In the poem “Iterations” Marc Frazier claims “There is no limit to the times a poet can mention the body.” Frazier’s latest book Willingly is true to his own words as nearly every poem is about inhabiting a body or the embodiment of ideas and emotions:

this body that stirs, or fails to
this barely defined shoulder
my body beside someone’s but not yet yours.

Frazier’s bodies are sites of memory, pain, desire, and the hope of transcendence through sensual connection with other bodies. These bodies are both familiar and alienating: his own body ranging from childhood to middle age, the alternately tender or cold bodies of lovers and objects of desire, and the bodies of his family members wracked with mental illness and the ravages of old age. Thus, Willingly is about how bodies are shaped by their environment, nurtured or neglected by family and community, and legible through scars:

Body, exhausted by metaphor–limited, earthbound.
Words can’t capture how it falters, breaks,
how there may be something more.

Words cannot capture a body in the sense that capturing means possessing and immobilizing it the way the possessiveness of desire sometimes wishes we could. But as a poet, Frazier’s words can depict the impressions of the body in motion, the way it ages, cowers in pain, and yearns for the touch of others.

Frazier begins his collection with the poem “little death; dissociative identity,” which sets the tone for his subsequent explorations of identity and desire. I imagine “little death” as a reference to the French “la petite mort,” a term that refers to the after effects of an orgasm. As the majority of the poems intersperse recollections of his dysfunctional family and meditations on his sexuality from childhood to present, the idea of sex culminating in a small death frames this relationship between his identity as a gay man and his upbringing in the midwest. The pleasures of the body mean that a part of him must die: namely the lingering trauma of a childhood that shamed his queerness as a man and an artist.

In “Synopsis” Frazier gives us exactly that: a run down of his infancy to manhood: “mother threatens to kill me during the seventh month of my life… mother is admitted for insulin and electro-shock therapies…I have to survive my father a difficult battle to win.” Living with a mentally ill mother and a stern Catholic father adds up:

While an upbringing does not determine one’s sexual orientation, it does heavily inform how one navigates their sexuality and what they want to get through it. By alternating poems about his family from the nostalgic to the traumatic with poems about his loves and lusts, Frazier’s poetry investigates how the wounds of the past drive us to heal through desires of the flesh.

All discussions of sexual desire carry the stigma of taboo in our culture, yet Frazier’s poetry is unafraid to be vulnerable and confessional. His work is especially brave because he does not merely reveal erotic desires, but also the pain of rejection, the lingering feelings of inadequacy, and the moral ambiguity of his sexual past. In two back to back poems, “Without Words” and “Sergio”, Frazier connects his difficult relationship with his mother to a failed romantic relationship. Addressing his mother, he writes: “Even now, I stiffen when you hug me,/ frozen in an infant’s body”. Through poetry, he attempts to find healing for his trauma:

Each word I write aims to uncover the damage,
to express trauma that happens before language

But a body remembers what happened.
How I want to surrender, to let you reach me:

The problem of wanting to love and be loved in a traumatized body that cannot process or receive love as the mind wants emerges as well in Frazier’s poems about sexuality. In these poems, he explores the dual nature of sex: the sensual and the carnal. I was particularly struck by some of the poems in which he positions the carnal as a reaction to the frustrations and disappointments in trying to make a sensual, romantic connection. In “Without You” he writes:

I bring bodies alive with a quarter
Watch them laboring
Like pistons and cylinders,
Without sound

To unlearn the beauty of you
the pornography does best

When a body he loved slips away, he responds with a carnal possession of another, virtual body he can always control. In “Sergio” this reactionary attitude is echoed as he writes “the more I have sex, the more I get even.” It’s brave to explore this unflattering, yet all too human and universal aspect of frustrated desire.

Despite the strong focus on a traumatized past and painfully honest poems about the darker and stickier elements of desire, Frazier’s book still maintains a certain level of optimism in the promise of sensual connection through bodies. In these poems, he crafts some of his most beautiful images and lines. In “Architecture” he writes

In “Heart Tide” Frazier writes of the hope for transcendence through vulnerability:

My clear heart rests in your hand
beyond death’s fingers
It holds itself, freed of geography and time.

That line beautifully sums up the aspirations of Frazier’s book. We recover traumas through the body. We feel the pain of shame, rejection, and frustration through the body. But at moments, bodies can intertwine and transcend the damage of the past and the physical constraints of the present. There are indeed no limits to the times a poet can mention the body, and through poetry we reshape and we rethink the bodies we inhabit each time they are mentioned.

Willingly is available from Adelaide Books

About the Author: Chase Dimock is the Managing Editor of As It Ought To Be Magazine. He holds a PhD in Comparative Literature from the University of Illinois and his scholarship has appeared in College Literature, Western American Literature, and numerous edited anthologies. His works of literary criticism have appeared in Mayday Magazine, The Lambda Literary Review, Modern American Poetry, and Dissertation Reviews. His poetry has appeared in Waccamaw, New Mexico Review, Faultline, Hot Metal Bridge, Saw Palm, and San Pedro River Review among others. For more of his work, check out ChaseDimock.com.

A Review of John Dorsey’s Your Daughter’s Country

A Review of Jumping Bridges in Technicolor by Mike James

He did it by the storm cellar.
He filled a bucket with water, set it on the ground.
We couldn’t think of one reason
to drown little black birds.
When my sister cried, he said it had to be done.

We said we would never grow up,
that we would rather die.
We did not watch so we never knew where he put
the bodies.  But his hands became powerless to touch us.

She belonged to his world in some things

this strange woman whose hands
were always leaving her side to create space,
to move things about, to bring something warm to her breast.

The next morning he cooked bacon and eggs.
He stood motionless but for one arm
scrambling eggs while mother
with fluttering hands prepared a table.

(Originally published in Primavera in the late 1980’s; won an Illinois Arts Council Award in poetry)

Image Credit: From Gray lady and the birds; stories of the bird year for home and school By Mabel Osgood Wright (1907) Public Domain

The soon-to-be-closed eyes of my father
stare at the dog planter on the window ledge.

Mother’s hands run fabric under the jumpy needle,
the machine’s drone luring me to love.

Nicks on Sergio’s perfect face
held like a calla between my flowering palms.

The smell of Sunday’s roast with onions
potatoes and carrots waft through register vents.

David of the Espanola Valley places his hand over mine
as I look above the table at New Mexican stars.

I cannot recall her last smile here beside the unplugged
body as the doctor says, “She’s passed.”

A white crow is at home in my front yard—
a symbol like everything is
I know when I see a cardinal’s red flit before me
It’s the spirit of my mother Agnes checking in
But I didn’t even know such an anomaly existed
I remember the white buffalo of Wisconsin
Many years back which drew crowds
But it died on everyone—a clear message I believe
Who likes crows to begin with
This one is loud like the rest and speaks to me
In its own inimitable bird language
A thing alone and so noticeable must be a treat
to predators—red in tooth and claw
though poets created a “murder” of crows
(scientists don’t use such a term)
some primal violence is associated with them
and I wonder how many baby robins
this glorious creature by my elm has devoured.
like me it must fit in with its peers where it can
It seems to feel safe and listened to with me near
When I hear a cardinal’s chirp I know God is real
When I hear this white crow, I wonder how we survive
When so much sets us apart from the flock
Our blessing, our curse