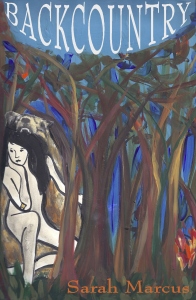 A Review of Sarah Marcus’s Backcountry

In my review copy of Sarah Marcus’s chapbook from Finishing Line Press, Marcus includes a friendly, cheerful handwritten note to me which she signs “Love & Bears.” Love – a not-unusual sign off, and she knew my gender, so it’s the salutation between two women writers, but bears? And I look at the title: Backcountry. Of course. Where there are bears.

Turns out, in the backcountry there’s also plenty of love, so Marcus was giving me a succinct preview of her book. There’s love and its near-opposite, a couple we see struggling in their relationship, their lives. By placing the couple so often in the outdoors, the usual trappings of domesticity disappear: no one’s fixing the indoor plumbing as a sign the romance has gone out of the relationship, no one’s passive aggressively leaving dishes in the sink. Instead, they’re looking at maps, watching for storms, telling stories and dreaming, building a fire, building a fire again, that deep symbol of made and shared warmth, the collapse into coals, and is that good or bad? – Marcus lets us answer that question ourselves, even as this couple cycles through unhealthy behavior that may or may not be healthier than the lives they lived without each other.

The couple flashes in and out of the backcountry and a more urban and expected life, both offering their unique dangers. The way a simple rain can turn into a flash flood, “how water steals faces but leaves bodies.” A car rusting in a driveway as the woman contemplates the relationship. What a boat’s spinning propeller can do. When a coyote follows the woman and the couple take up a gun and bow, it’s clear this is not a real coyote but the specter of the relationship’s disintegration they’re warding off.

We hear that howl. We wish the couple well.

I should say: We sort of wish them well. This is a couple we sense shouldn’t be. Still, if this invented couple were all prairie paintbrush and squeaking marmots, all fireweed – the flower that blooms prolifically and purple after wildfire has scarred the landscape black – we’d be disappointed. We need their struggles and their troubles. We know those troubles, and hope we’re mostly beyond them, or won’t stumble into them again. We’ve been the man, telling her “not to make this more difficult than it needs to be.” We’ve been the woman saying everything’s fine, but “annoyed they’ve hiked all these miles to have the same conversation they’ve had at their kitchen table hundreds of times before.” We’re the looming need for rehab, the possibility of prison or a psych ward, the needle scars, the parent dying, the waste of looking for completion through another person instead of through the self.

Though I’m spending time telling the stories, that’s not to say it’s the only reason to keep reading. The narrative arc is pleasing, no doubt, but it’s the fineness of the poems and the finesse of language that makes each poem worthwhile. Like a tracker, I follow Marcus’s language, looking for the misstep in the mudbank – the classic mistake of a creature not wanting to be noticed – but there are no missteps here. Marcus’s chap is the literary equivalent of walking on rocks, each line firm and carefully placed. The endings are an absolute pleasure, never forced, and when I go back through and read them I notice that all but three or four of them end on the woman’s actions or point of view, and maybe this shouldn’t be surprising but I’m enormously pleased by this. Toward the end of the book, the softer third person switches to first person, the hammer of it – there’s been a major shift in the relationship – and it’s dizzying and perfect, both sad and triumphant.

And not to give too many spoilers, but there are bears, though not, perhaps, the bears you might expect. Take a woman and a man. Add some hardships and addiction. Have the adults deal with those things again and again. Now add bears – see how the wildest things go on and live or die without us, see how they move on, as in dreams? That’s how it is, Marcus tells us, for good or ill. That’s what happens in the backcountry.

Karen Skolfield is the author of FROST IN THE LOW AREAS (Zone 3 Press, 2013). She lives in Massachusetts with her husband and two kids. She teaches technical writing at the University of Massachusetts Amherst, where she also earned her MFA. She is a contributing editor at Bateau Press and the literary magazine Stirring, and her poems have appeared in 2011 Best of the Net Anthology, Cave Wall, Memorious, Painted Bride Quarterly, Rattle, Tar River Poetry, Verse Daily, West Branch, and others.