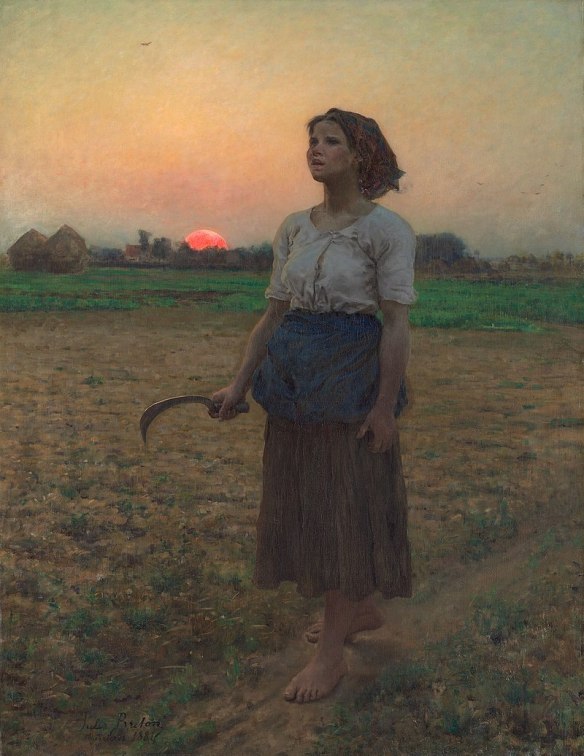 In the flat hills of the village
Next to the tiny streams irrigating the wheat
The sweat hangs, clinging.
Like tears—cleaving skin—to that tight white blouse
Before dropping to the ground the hour before dark
As the hornpipe and the heart swell with yearning
Waiting for the hour to sit down as the blood-orange red sun sits
Momentarily in the embrace of the hay
As the colors of the world drained away by the shoulder aching
Until at last that salmon roe of a sun finally bursts
Letting out all that is glowing, glistening,
bulging, bleeding, burning
the riding hood in scarlet face facing against the sun, still
waiting for the prodigal son.

Her brother.
Returning but never
returning from his adventures with women.
Her scythe will one day take her father away, she thought,
as the sun ravaged her baby white skin, toughed it, burned it.
Like her pink soft lips.

A moment of translucent clarity–that boundary of brown–
That all colors melt to
like the ground–dappled with her sweat.
Yet at the beginning of darkness, she sees, distinguishes still:
The purple dome and the church she never saw, and had no use for.
For that was the color that lured her brother away.
She had no use for that grandiosity.
She wondered if she still retains faith in Father,
When the sun sets and the moon comes by
And the silence of the night perturbs memory
Of Father who knew it all and talked
but was powerless
to stop the destruction of his son.

About the Author: Tiffany Troy is a poet based in Flushing, Queens. Her poems have appeared in Chrysanthemum, Portales, Tabula Rasa, Quarto, and the Underground and have been awarded the Core Scholar Prize and Louis Sudler Prize in the Arts. She is a CA/T Community Class participant since 2017. This poem was written in the Art of Ekphrasis, taught by Emma O’Leary in Spring 2019.