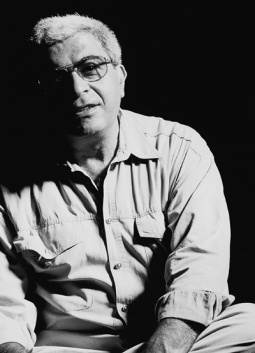 Written by the Lebanese man of letters Elias Khoury, Little Mountain (al-jabal al-saghir 1977) is a novel set during the early phase of the Lebanese Civil War, a war that lasted from 1975 to 1990. Paradoxically, the civil war in Lebanon has had a tremendous impact on Lebanese literature as it generated an unprecedented number of new works which were influenced by it, so much so that the civil war has been characterized as the “midwife” of the Lebanese novel.

The appearance of these novels about the civil war, which were written from the perspectives of those who fought the war as well as those who were devastated by it, is now considered to be a threshold for the start of fully fledged experimentation in the Arabic novel, or, to put it in generic terms, from the realist mode to the experimental one. Although this experimentation in form can be traced back a decade earlier, to writers such as the Palestinian Ghassan Kanafani (especially his formal experimentation in All That’s Left to You), it is with appearance of these civil war novels that this mode of experimentation became normalized, or more accepted. Therefore, Little Mountain has come to occupy a special position on the trajectory of the Arabic novel’s development. Given that the century-old Arabic novel is a relatively new form within the much larger Arabic literary tradition, the importance of this movement from the more or less traditional realist mode to the experimental cannot be understated.

In an essay entitled “After Mahfouz,” Edward Said describes Little Mountain as the first departure from the style of novelistic writing that dominated the Arabic novel for much of the twentieth century. While it is an overstatement to claim that this novel is the “first departure,” I think the general gist of Said’s characterization is accurate in that it symbolically points out (as the title of the essay suggests) that Khoury’s novel marks the break with the realist style which the Nobel Laureate Naguib Mahfouz had mastered, or even perfected, as some would have it. Writing about this break that he locates between Mahfouz and Khoury, Said says that “from this perspective Khoury’s work bids Mahfouz an inevitable and yet profoundly respectful farewell.”

It would be somewhat misleading, however, to say that Little Mountain is about the Lebanese Civil War. A more accurate way to describe it would be that it centers on the experience, told from hindsight, of an individual who gets implicated in this most horrible of wars. The novel tells the story (or to put it more accurately, the ramblings) of a fighter who has chosen to join the ranks of the fiddayyin, a group comprised of Palestinians and their supporters which fought in the civil war, despite the fact that this group fought against the Christian militias which were supposed to protect the interests of the minority to which the narrator belongs. Right from the outset, we come to understand the novel’s main narrator as someone out of place, as someone who positions himself outside of the locality to which he was assigned by virtue of being born in a certain neighborhood and to a certain family.

This, of course, is never spelled out explicitly in the novel. We come to understand the precarious position of the narrator (who is never named) from the choices he makes and from his decision to affiliate himself with one group over another. To put it succinctly, his position is based on affiliation rather than on filiation. The difference between the two, of course, has great implications to the formation of the self as this makes such formation reliant on an ethic of movement or becoming rather than on that of being. Crucially, these decisions are never explained ethically or ideologically. While they certainly have these elements built into them, they are part of an underlying scheme rather than part a manifesto-like, simplified explanations.These choices come to define the narrator’s private narrative as well as the larger narrative that he chooses to become part of. In a situation such as a civil war, choices are not a luxury, but a necessity.

In “After Mahfouz,” Said discusses some of the crucial aspects of Khoury’s style vis-à-vis the formation of selfhood. “Style in The Little Mountain” he writes,

is, first of all, repetition, as if the narrator needed this in order to prove to himself that improbable things actually did take place. Repetition is also, as the narrator says, the search for order—to go over matters sufficiently to find, if possible, the underlying pattern, the rules and protocols according to which a civil war, the most dreadful of all calamities, was being fought. Repetition permits lyricism, those metaphorical flights by which the sheer horror of what takes place…is swiftly seen and recorded, and then falls back into anonymity.

The point Said makes via the narrator about repetition is quite illuminating. For him, repetition is not the opposite of order. Rather, repetition is a search for order in a situation in which order is obliterated by a chaos that has become part of the mundane, everyday reality. The paradox Said points to shows us that even in the chaotic form that Khoury creates, there is an underlying desire to seek an order that could possibly mitigate the traumatic experience of the individual. From this standpoint, the traumatized subject constantly seeks a fleeting order even when the subject appears to do anything but seek such order.

To illustrate some aspects of the style that Said mentions here, it might be useful to start at the beginning. That is, to start with a passage that appears in the first few pages of the book, and which gets repeated time and time again throughout the loosely connected five chapters of this novel. In fact, the constant repetition of this passage also illustrates the hyper-episodic narrativity, or the utter inexistence of causality, in this novel.

Spoken by the main narrator, the passage gives us crucial clues about the style in which the novel is written, but, more importantly, about the narrator’s choice of affiliation. He says:

Five men came, jumping out of a military-like jeep. Carrying automatic rifles, they surround the house. The neighbors come out to watch. One of them smiles, she makes the victory sign. They come up to the house, knock on the door. My mother opens the door, surprised. Their leader ask about me.
–He’s gone out.
–Where did he go?
–I don’t know. Come in, have a cup of coffee.
They enter. They search for me in the house. I wasn’t there. They found a book with Abdel-Nasser on the back cover. I wasn’t there. They scattered the papers and overturned the furniture. They cursed the Palestinians. They ripped my bed. They insulted my mother and this corrupt generation. I wasn’t there. I wasn’t there. My mother was there, trembling with distress and resentment, pacing up and down the house angrily. She stopped answering their questions and left them. she sat on a chair in the entrance, guarding her house, as they, inside, looked for the Palestinians and Abdel-Nasser and international communism. She sat on a chair in the entrance and they made the sign of the cross, in hatred or in joy.
They went out into the street, their hands held high in gestures of victory. Some people watched and made the victory sign.

From the repetition of the sentence “I wasn’t there” we come to understand two key notions about the way the self is constituted in Khoury’s novel: chaos and absence. The self is first and foremost constituted by absence, an absence that is not complete, but rather an absence from its designated place. We should remember that the narrator is never named, and this perhaps is the ultimate absence, an absence from one’s own narrative. Such elision cannot be taken lightly as it highlights a crucial choice on the part of the novelist, a choice to make out of an absence a disfigured and incomplete presence.

Thus, the only thing that is captured of this narrator is a chaotic and disfigured narrative about an incomplete, incoherent life: episodes from a sheltered, confused childhood in the predominantly Christian neighborhood known as “little mountain,” episodes of street fighting without an apparent objective or justification, and finally a short episode about the fighter’s time in Paris where he goes to be treated of his wounds.

Narration in Little Mountain, then, is always an organizing principle, regardless of the form (or lack thereof) it takes. In Khoury’s novel, the principle of chaos or chiasmus (depending on the generosity and patience of the reader) becomes the device through which the self makes sense of itself as well as of the incoherence in the midst of which it happens to be.