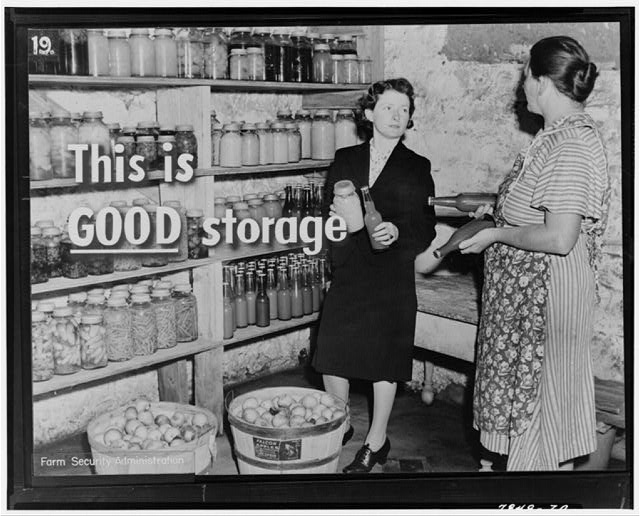 Mrs. Reagan, Who Lived Next Door

Mrs. Reagan, (Elizabeth only to childhood friends,)
walked ramrod straight even into her nineties
as if her Lord and Savior was watching.
A believing Methodist doing all the good she

could all the times she could, showed thrift,
practicality, by example, weaving rag rugs,
preserving her garden gifts into winter’s food,
storing seeds in coffee cans for next season’s

sowing. She made the best popcorn while
babysitting us on the rare nights our parents
went out, amusing us no end with her drum roll
after-popcorn snores. Her thrift, coupled with no

small amount of style, showed in the clothes
made for our dolls. She only ever raised her voice
to my sister and me when she caught us
gobbling plump Concord grapes peeking

through the wire fence between her massive
garden and our unkempt patch whose only
proofs of nature: fuzzy pussy willows
tickling noses; under chin reflections of buttercups;

sunny dandelions seeding into feathery bristles
blown away with our wishes; gigantic crab apple
tree, a canopy for summer reading. “Look at that
old man,” Mrs. Reagan pointed at through her

dark kitchen’s window (electricity was for
nighttime only.) The man, bent like a toppled
letter L, lumbered down the unpaved alley
towards the garden gate, another day older and

deeper in debt to the masters of anthracite. He’d
settle in front of their aged television set,
the screen barely six inches, sipping on soup
served with stale saltines, his wife’s effort to

“make dinner,” unchanged for the five decades
they were wed. She often commented,
“Mr. Reagan said …” although no one ever heard
him speak or even saw him except for those

work day plodding-alongs in the alley behind
the garden where his wife, in frayed hat, sturdy
work gloves, sensible dress (always hand-made,)
rested on the swing under the oak tree, “just a

second” before returning to her corn stalks
towering several feet above her, the Roma
tomatoes plump and sun-reddened, the usual
yellow wax and long green beans, squash, peas.

Today, as I was rinsing out the jar of tomato
sauce to store some rice, the mailman arrived
with a letter from her daughter:
“To the astonishment of all, Mother decided

to lie down for a nap this afternoon, and that
was that. She was ninety-eight and longed
to be one hundred, but that was not to be. Still,
it was a long, useful life, and for that we are grateful.”

About the Author: Diana Rosen writes flash, poetry, and essays with recent published flash and poems in Existere Art & Literature Journal (Canada), Potato Soup Journal, and WildforWords (UK) and an essay in “Far Villages”, an anthology from Black Lawrence Press. She lives and writes in Los Angeles. To view her work, please visit www.authory.com/dianarosen

Image Credit: John Vachon, from the Farm Security Administration – Office of War Information Photograph Collection (Library of Congress) Captioned: “Nothing wrong with these shelves. Shelves like these may be built in a well-ventilated cellar, cave, or closet where it is cool, but not cold enough to freeze, and where there is no strong light. They are wide enough, they are built of strong boards, and they are braced with sturdy supports. One hundred feet of twelve-inch shelving will hold five hundred jars. Notice the orderly arrangement of jars. All foods of one kind are together” (1939)