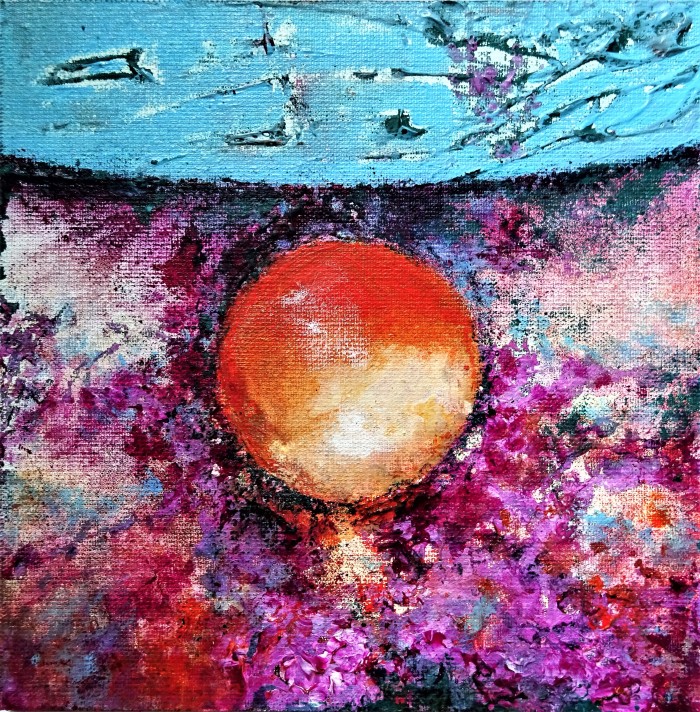 We lost the far away from our eyes
peering at our precious tiny screens.
Addicted to the chatter in the blue light
we spat and growled at the slam, slam, slam,
of constant crisis, constant cries.
We marched figuratively through our newsfeeds,
wound tighter and tighter—blinded,
to that which was not inside our screens.
And all the while the earth was turning,
away, away, away.
Until we could see her
no more, and we were gone.

TO BRING THE SKY DOWN

A scared flame of violet – burnt from a found bone,

The indigo of your first lover’s jeans,

High sky blue of a day in spring when the larks sung,

Yellow of the belly of the one who cowers,

Orange from the fungi that grows under the dead fox,

The red of a berry that poisons.

Plait the rainbow – red over orange, yellow over green, blue over indigo,

Tie with violet at the deepest hour of black,

Make sure you bind the rainbow’s ends tight,

When required, cast from a clifftop on a dark moon night.

F. E. Clark lives in Scotland. She writes, paints, and takes photographs—inspired by nature in all its forms. A Pushcart, Best of the Net, and Best Small Fictions nominee, her poetry, flash-fiction, and short stories can be found in anthologies and literary magazines.

Contributing Editor’s Note: In “Myopia,” F. E. Clark takes an existential view of what has become second nature to all of us: looking at our phones while ignoring the world around us. The poem is written in the past tense and reveals the sad outcome of having lived our lives through a few inches of screen. She exposes the profound sadness when, “We lose the far away from our eyes” and are exposed to “constant crisis, constant cries” as we respond and read social media and news feeds, while the world continues its routing rotating When we “away, away, away.” And at the same time turning its back on us. Her dystopic conclusion is that the less we participate in the world, the less we ourselves exists.

Clark regains her vision of what life can be in her poem, “To Bring the Sky Down.” Her remedy for the blindness she encountered in “Myopia” is keen observation reinforced by incantatory rhythms. What she sees when she looks closely at the world around her is remarkable. Clark finds antidotes in vivid technicolor, among the discarded, “The indigo from your first lover’s jeans”; the decayed, “Orange from the fungi that grows under the dead fox”; and the dead, “Green fired algae from the dead pond’s pitch”. She collects strands of color, plaiting them into a rainbow for eventual use in the darkest times.

Contributing Editor Alan Toltzis is the author of The Last Commandment. Recent work has appeared in print and online publications including Hummingbird, Right Hand Pointing, IthacaLit, r.k.v.r.y. Quarterly, and Cold Noon. Find him online at alantoltzis.com.

A NOTE FROM THE MANAGING EDITOR: