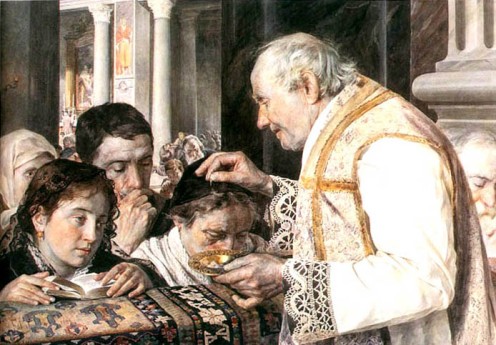 The Social and Spiritual Possibilities of Lent

Editor’s Note: Our late Managing Editor, Okla Elliott, originally posted this article two years ago. It was his final post before he passed away. We are republishing this article in his memory. In the final year of his life, Okla took a deep interest in exploring spirituality, theology, and Catholic teachings. This article is a prime example of his great ability to investigate new ideas and understand their capacity for better expressing and illuminating his core values and principles.

According to a 2016 article in The Independent, the three most common things given up for Lent are chocolate, social media, and alcohol—in that order. And a 2015 TIME article offers similar findings. These are all personal sacrifices that do not have much of a social or political dimension. Giving up certain popular items such as meat does have a notable social impact. The environmental gains of giving up meat are significant, since the factory-farming livestock industry has several negative impacts on the environment, from inefficiency of food production to detrimental waste products.

I offer here a list of five options for what we might give up for Lent that can merge spiritual growth and social betterment.

1) I would strongly suggest the aforementioned meat option, since it has such a prominent place in tradition and can have such a positive social impact.

2) If possible, give up driving and use public transit instead. This will have a positive environmental impact, obviously, but it will also allow you to see the people of your city whom you might otherwise never encounter. Of course, this is perhaps an option only for those who live in certain areas, but you might be surprised how elaborate your city’s public transit is if you’ve never looked into it.

3) Give up eating out. At first this might not seem social at all, or even the opposite of a social option, but if you conceive of Lent as not only a negative notion of giving up, but also a positive notion of doing something good with what you gain by giving up things, then you will see that the several hundred dollars you save by not eating out can be used in myriad ways for social good. I would suggest donating to non-profits or your church’s efforts to help the poor. You could also use the money saved to do nice things for friends and family, which will strengthen your social community at the closest level.

4) Give up the convenience of plastic bags. Make the extra effort to bring a canvas bag with you when you shop, or if you’ve only purchased one or two items, don’t ask for a plastic bag. With an estimated 8 million metric tons of plastic entering our oceans every year, to say nothing of the millions of tons in our landfills, reducing unnecessary use of plastic is of paramount importance.

5) Give up self-reinforcing thought. This one is a bit more abstract, but it is no less important. What I mean here is that if you’re a staunch Democrat, make yourself read several issues of a conservative magazine not with an eye for criticism but rather an urge to understand and empathize. And do the same if you’re a diehard Republican. Read some classics of liberal thought and really try to hear the concerns mentioned. The point is to bridge divides and to prevent hatreds between humans. If we can force ourselves to develop the habits of mind that reduce prejudice and living in our echo chambers, we have a much better chance of curing the ills of the world.

What makes the above choices good ideas is that the social impact in no way reduces the spiritual impact. Giving up driving to work in favor of taking the bus, for example, is a personal sacrifice just as much as giving up social media would be, yet it helps society more broadly in addition to the spiritual gains associated with the sacrifice.

And there is no need to limit yourself to the five options I offer here. Get creative and make your own list that suits your personal and social concerns. There are many ways to improve ourselves and the world around us, and doing one does not preclude doing the other.

[This piece originally appeared at PennLive.com and was syndicated to several other venues in 2017.]

About the Author: Okla Elliott was the co-founder and Managing Editor of As It Ought To Be from its inception until his passing in 2017. For more about his life and work, visit our memorial page.