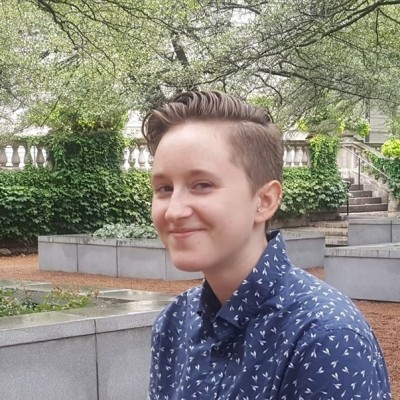 
I lived a year in a small black box

some nights not even an inch

of moonshine would sit on the windowsill

with no objects no

thing save the thick dark

are you still breathing
dark

no      dark was too loud to keep itself shut

it could be wiping its lips right now

Today’s poem was previously published in Issue 14 of Rivet: The Journal of Writing that Risks and is reprinted here today with permission from the poet.

Andrea Sherwood’s work is published or forthcoming in Pennsylvania’s Best Emerging Poets, Lavender Review, and Rivet. Currently, Andrea is pursuing an MFA at the School of the Art Institute of Chicago.

Guest Editor’s Note: Repetition is effective in conveying palpable fear and panic in Sherwood’s piece about loneliness and dread. The light and dark entities in this poem reach out like hands to the throat, alternately choking and releasing air and emotion. The airiness of the lines allows space for feeling and time to process, and line breaks leave breathless openings for more. Form operates successfully to produce an uncomfortable disposition and an opportunity for understanding of the speaker’s secret inner turmoil.

The metaphorical box feels real and turning light into a terrible monster is a remarkable turn at the end of the poem. The trepidation lingers long after the terror has been distilled in the image of “screaming three a.m.” which bends the poem into a new perspective and a dialogue with the dark. Light then becomes a colossal entity more unexpectedly frightening than living in the “thick dark” of a “black box / under a barbershop.” The final image of the light that “could be wiping its lips right now” is an alarm sounding somewhere, maybe even silently, that what is true in the dark is also true in the light and fear knows no difference.

A NOTE FROM THE MANAGING EDITOR: