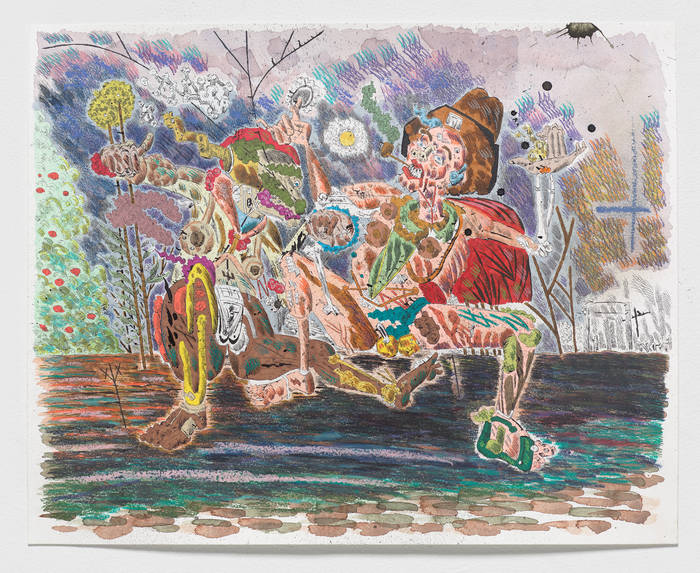 Albert Herter’s show at Koenig & Clinton, “The Quincux Aspect”, presents a series of Lacanian drawings Herter has been working on for nearly a decade. They parallel his study of and experience undergoing Lacanian psychoanalysis. The exhibition at Koenig & Clinton is Herter’s first solo show in New York City. He first presented 23 similarly themed drawings in a solo show at Partisan Gallery in San Francisco’s Mission District in 2012. The current show includes 45 medium-sized color drawings made from acrylic ink, colored pencil, oil pastel, and marker on paper.

The basic subject of the work is the subconscious, and Herter, now a Lacanian analyst by day, pours out what are intricate scenes and rich drawings filled with Gargantuan and Rabelaisian themes of excess. The result is a series of narratives that sit suggestively beneath the ego layer, many revolving around sexuality and decadence. The drawings also offer a veiled commentary on the excesses of capitalism. Perhaps this says something about what lies latent in the ego of society itself.

The drawings are set very theatrically, either in some kind of outdoor landscape or city square. The characters are elaborately costumed, articulated marionettes, although they lack any apparent strings or controls suggesting the absence of determinism. Usually paired in settings of two or three, the characters engage in, or act out, a drama filled with interpretive complexity. 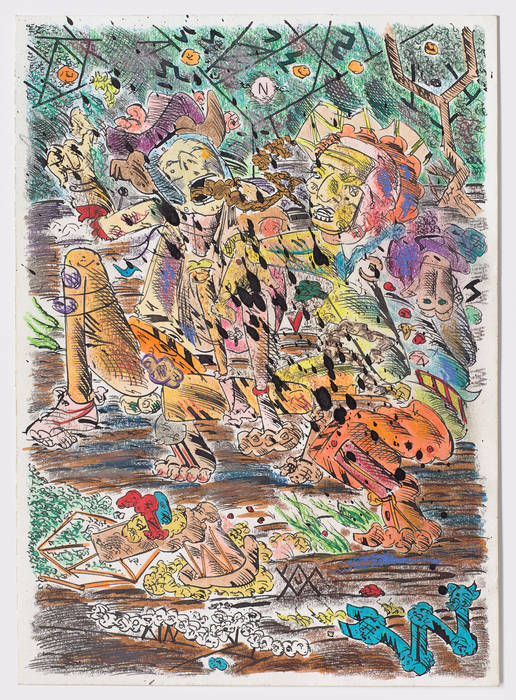 More akin to the literary works of Apuleius and Petronius, the drawings do not themselves have obvious historical antecedents, although it can be said the work is influenced by 20th century comix tradition. But there are also more classical influences: the pre-Raphaelites whose reliance on abundant detail, rich colours and complex compositions comes to mind, as does German Expressionism, particularly George Grosz who presents luxury and the grotesque in coexistence. Herter’s portrayal of the body can also be viewed as unmistakable baroque, with ornate detail reminiscent of artists who favored the suggestion of lusciousness over the rendering of exact forms.

The Lacanian principle, jouissance, is invoked to show the dialectical interplay between enjoyment and suffering. By transgressing the limits of pleasure, Herter’s characters often exceed the boundaries of pleasure, thereby entering the realm of suffering and pain. The message here is that the very thing that one enjoys, and which the body gains pleasure from, can also be a destructive, consuming force. In this regard, Lacanians would posit that the sexual orgasm is self-annihilating and in that sense, these works seem to devour themselves with their overabundance. Herter invokes the intimate gaze of the voyeur with some characters who seem just out of the narrative. Yet a claustrophobia attends to the cramming of symbols into such small compositions.

The title The Quincux Aspect likely refers to quincunx, which denotes a geometric pattern of five points arranged in a cross-like formation. It can also refer to a bronze coin that was used in the Roman Republic and valued at 5/12ths. Herter may be referencing a grouping just under a majority, or a nod to religious iconography, suggesting in both cases a lack of the individual’s power. In many respects the economic narratives that pit the haves against the have-nots renders individual choice meaningless — and, in a sense, obscene. 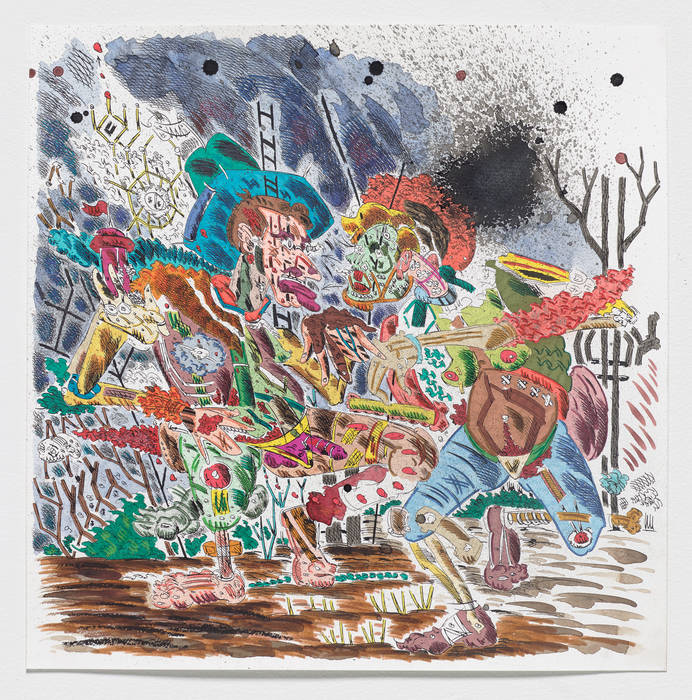 Herter has said that he does not think at all while drawing these scenes.  The narratives appear on their own, naturally hinged to his experience, yet outside of it, with many of the bodies rendered disjoined and fragmented in exceptional ways. The drawings present aspects of anamorphic portraiture with the corresponding emotional confusion and psychosis, presented in contrast to characters in reverie of the pleasurable and excessive.

Given this, these works act as powerful artifacts of Herter’s Lacanian explorations. What could have been left on the floor of a psychoanalytic session is rendered in beautifully provocative colored drawings. These works invite direct personal response. In fact, it can be said that they were made to be interpreted. One suspects that Herter wouldn’t want to have the last say on their meaning.

Albert Herter (b. 1980, San Francisco) holds a BFA in New Genres from the San Francisco Art Institute, where he studied abstract painting, video, installation, and performance. His drawing work with accompanying surrealist text was published by Comfortable on a Tightrope (Manchester) and Museums Press (Glasgow) as In the Curtyard: Orchestrated Reduction of the Fantasm. Herter lives and works in Brooklyn, New York.

Addendum: Dana Smith notes that The Quincux Aspect is an astrological term. From AstroWiki: “An aspect of 150 degrees between two planets. The quincunx is thought to be one of the most important minor aspects. It is valid with an orb of up to three degrees. Even astrologers who do not usually work with minor aspects often include quincunx aspects in their interpretations. The quincunx is classified neither as a harmonious nor as an aspect of tension. It indicates potential that is difficult to realise. In contrast to the square or opposition it doesn’t usually feel like a significant source of tension, demanding action.”