The New Age of Political Protest

Clouds hung low above Logan Circle in the final hours of the Obama years.  Over two-hundred black clad protestors commandeered the statue of the eponymous general, chanting as school buses full of riot police with U-hauls carrying their gear rumbled down the half-empty streets.

I stood with three legal observers from North Carolina.  Unidentified photographers with modern equipment began taking panoramics.  Most faces were covered in bandanas or balaclavas, rendering the value of such images rather less than under normal surveilance. 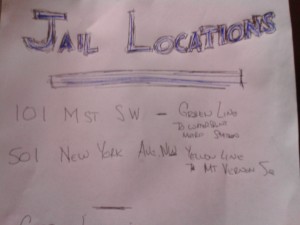 Few permits were issued for the inauguration despite the certainty of large protests, making it all the easier for the group to spontaneously pick a road to march in contempt of law.  A few taxis were surrounded by the crowd chanting and setting off fireworks of a grade illegal in some states.  Some of these drivers cheered and honked in support even though their times is money.

A 1990’s model police Impala was left unattended in a park.  Hammers quickly appeared from pockets and made quick work of the windows of the vehicle, which police might have considered their least popular in the fleet and needing replacement in their budget.

Like a school of fish sensing either danger or sustenance, the group then veered down K Street.  Police kept their distance until the psychological energy reached a boil.  “Fuck Starbucks!’” “Fuck Bank of America!” and these spaces were also suddenly converted to al fresco through the removal of windows.  Paintsprayer technology repurposed for pepperspray began knocking down these protestors en masse.  A few escaped by slipping through the national guard, who do not have authority to arrest civilians.  Approximately 100 people were sealed in and arrested, including credentialed journalists and legal observers through the National Lawyers’ Guild.

National media have been baffled by the ’Black Bloc’ since 1999’s ’Battle for Seattle’ against the World Trade Organization.  To be clear I am on the periphery of these circles though, unlike many journalists, I have had the opportunity to spend days in dentention with this stripe of activist.  Jail affords many hours of frank discussion.

Black Bloc is not an organization.  It is considered more of a ’tactic.’  The goal being chaoes and anonymity allows a person to ’’leave the bloc to perform a direct action as they see fit, and then return.’’

Even those who are sympathetic to protesting are reflexively quick to condemn such tactics. When dealing with anarchists, or now more broadly self-termed as anti-fascists, we are often dealing with mostly white activists coming in by foot, stuffed car or hitchiker’s thumb from out of state.  This marks it somewhat different than the fires and havoc wrecked in local communities such as Baltimore and Charlotte, as residents responded to killings by the police.

The question is whether such actions have a place in the American protest movement.  Doctor Martin Luther King Jr is famed for bringing great results strictly through non-violent direct action combined with legislative pressure.  The Boston Tea Party of 1773 was rather more edgy.  To go further, John Brown’s assault on Harper’s Ferry is retroactively seen as a heroic step in abolition but at the time was considered domestic terrorism of the highest order, punished by death.  The KKK’s North Carolina ’victory party’ after Trump’s election was cancelled due to black bloc type protestors.

Property destruction is a form of violence. Six police officers were reported injured, two of whom were sent to hospital.  The only fatality in the twenty years of such escalations has been Carlo Giuliani, an Italian killed by police during the 2001 G8 summit.

Are such tactics necessary? They allow a relatively safe outlet for those infuriated to extreme measures, and have become almost ritualized at major confabs of the global leadership.  They command a certain respect from polie forces and journalists, though the purposes of this violence may be obscured and mystified for the average onlooker, or even average co-protestor.

In contrast the pipeline protests, most notably Standing Rock, are a form of rural Occupy Wall Street.  The prevailing attitude among the thousands there is more of a peaceful, overtly feminine strategy.  Though property damage in the form of outright sabotage is not unheard of, as is facing stiff sentences for chaining oneself to machines in order to slow work on the pipelines.  This, even, is considered violence by the authorities.

To break the window of your neighbor and be caught doing it is usually an act that a street level police officer can resolve without burdening the court system.  To break the window of a corporate person as political theatre is to face multiple years of incarceration.  Even those with but the scantest sympathy should take pause to examine the justness of such disparity of punishment.

Perhaps the Black Bloc mentality has become detached from specific causes and is more akin to Civil War re-enactors.  Perhaps people resort to property destruction and providing their bodies for arrest because like segregationist governors of fifty years ago, the authorities are impenetrable and unresponsive to demands for a new energy plan or new model for education funding, among other unrequited demands.

The center is not holding.  Faith in nightly news, political parties, academia and consensual reality itself is at an ebb not seen in a full generation, and perhaps worse than the malaise of the post-Watergate years.

More questions than answers abound about the path forward from today.  Dismissing every form of protest beyond that of writing letters to congressional aides locks out many energetic activists and locks in many moderates who will grow desperate.  If prison time is handed out for occupying city parks, this serves only to encourage true violence and proto-terrorism.  Might as well have something to show for your lost years.

As I ripped off my black sweatshirt without disturbing my hat and sunglasses in an elegant motion, a woman going about her business on the sidewalk smiled amusedly as I revealed a pink outfit and drifted into the crowd.  A realistic response.