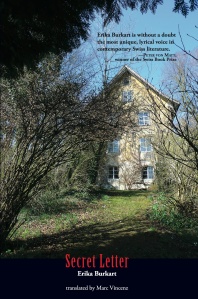 I find oddments of old clothes,
memory carriers,
witnesses of suffering, happiness too—
cut to size, measure up, adjust to fit,
consider the patchwork in daylight.
Mending is a metaphor.
Has one lived too long?

Once I wove wreaths of wildflowers
for children
and studded plastic crowns
with glass jewels.
There was a boy, and I, his girlfriend;
children accumulate time
not out of years—
children played mostly until 6
up in the old country, where no timepieces
chop life up
into you-have-to, you-are-permitted-to, and being.
I gave them the names
of mountains, birds and flowers,
signposts to the Creation Lab,
where a thousand years are an instant.

I must, having gotten older and old,
adjust, attempt to cope with Thousandfur-stuff,
search within sleep
for hiding places and nooks—freeze—
burn one day with hair and skin
while herein the mythical hope,
the invisible one is collected
from the cryptic, smiling messenger,
God with the winged shoes.

Over fading hazelnut leaves,
cloud-towers deconstruct,
and a yellow and distant light
swarms upward behind the mountain, as if
a new earth were sending
golden birds ahead.
It’s only a deceptive luminance,
a glittering afterglow,
like lost joy she paints,
paints over,
in a picture
never to be completed.

The word is sealed shut,
you must dig for the word;
the word cuts through
so it may carry on.

The word
comes to pass;
catch it in flight,
don’t tie it down,
just hold it as you would a bird: free,
because the word wants to fly,
wants to be grounded and rooted, to seed and to
bud,
who knows where, when—
no one knows the legend of the word,
and one who might know it,
would be one
who spoke with God.
Both poets and children
seek the right word,
but the right word
mostly arrives too late.

Thomas Bradly: Congratulations, Marc, on your new translation of the great Erika Burkart’s Secret Letter (Cervena Barva). To what extent can your cosmopolitanness be attributed to your “peripatetically linguistic renderings of foreign verse?

Marc Vincenz: When you live as I have done, through extremely diverse cultural landscapes—say for example, from the gagging metropolis of Shanghai one day to the expansive volcanic plains of Iceland the next—you develop a broad view of the world, of language. You become an observer, an accumulator of culture; ideally, absorbing the most illuminating sounds and visions from each of the places you set your bag down. There is a moment, after all this wandering, when something coalesces in that vast array of voices and images. They come together in your mind as one, and somehow the world becomes easier to listen to, to silently observe. Language itself becomes easier to absorb. At least, that is my experience of it.

Does my international upbringing have something to do with my affinity of/for other languages and cultures? Most certainly—it’s a passion, Tom. Do I feel comfortable in a wide array of places and sounds? Yes, absolutely. It was entirely the way I grew up—slipping in and out peripatetically from place to place, from tongue to tongue.

TB: And what of your own poetry? How has your international exposure influenced your work?

MV: Naturally each locale has its own fragrances, its own cultural quirks, mythology, architecture, landscape, customs, politics—and yet, all of these are mirrors of another culture: different ways of expressing (symbolizing) the same things. Humanity, after all, is human—desires and needs are much the same the world over. Imagination and innovation is a constant. It is my firm belief that inference and foresight are at the heart of human language. Likely this is the reason why poetry has such an important role in my life.

Something from everywhere I have laid down tracks has wormed its way into my writing. And, in that sense, I suppose you might say that much of my writing is about place—or to put it more succinctly, about defining space. Becoming the Sound of Bees and my newer work are set in mythical lands—or lands of the wandering mind, if you will. These mythical lands are assemblages of many cultures. Spaces that appear to be specific are not obviously contextualized; allusions to figures out of history or entirely out of the realm of the subconscious (forests, mountains and oceans) materialize from out of the possible past or potential future. These are reflections of many eyes and tongues, many senses—real or imagined. They are attempts at the discovery of a common thread or vibration that carries through most known and imagined worlds. It seems to me that by stepping outside the every day or very familiar and placing it somewhere new—an assemblage or clustering (as if around a cell or an atom)—that the most captivating thoughts become less obscured.

TB: So how does this continual up-rooting, this constant changing of locale, effect your own work?

MV:  Traces of diverse mythologies or cultural symbols creep into your every day, into your sense-field; smatterings of music and snatches of landscapes too. A poem may arise with a visualization or it may make itself known sonically through an opening line, a mental image or a melody that leads the rest of the poem musically or imagistically. So, sound, cadence and tone (the singsong resonance of a particular tongue) finds its way through the tiniest of crevices. And the most vibrant visuals too: from the street stalls of Asia to the jungles of South America to the mountain landscapes of the Alps.

Quite often, while working on a poem, I’ll find myself transported to one of these distant locales. When there in your mind’s eye, you can’t help by become enchanted with the feast of senses. More often than not, I allow these senses to come through and reflect themselves in the poem. Occasionally they lead down dead end roads, but mostly they are loyal companions on my literary journey. Over time, I find it easier to tap into these other worlds—even sitting in a café in the middle of New York City. And strangely, at least for me, it is probably the most effective to dream up a world at the polar-end of the place you find yourself in that particular moment.

As you know, I was brought up a wanderer. It is in my blood, no matter where I find myself, and so, in the course of my writings, I drift and delve—from the embalmed history to the embedded memory to the unleashed imagination, which is, of course, a reflection of memory too.

You seem, lately, to be bringing these hugely far-flung worlds, traditions and idioms together into a composite poesy and mythos, planetary rather than regional. Is this a conscious project? I would think, if you set explicitly out to do such a Herculean labor, it might be daunting, to say the least. But, reading your books in succession, it feels more like a—to use the devalued term—organic process.

The actual outpouring comes organically, as you say, however it can and may be induced by train journeys, earthquakes, mountain paths and or encounters of a circumspect kind. No, seriously, I would say it is a natural other-dimensional state of awareness, no more than slipping into or shedding of a second skin. It hovers there all the time: a parallel state of reality—a would-be-could-be-probably-will-be. There’s that foresight in the firelight again, that sense of reaching into the primordial fire: the realms of mythology and magick, the realm of “sacred” symbolism.

From time to time, there are themes or images that arise in those semi-conscious moments that drive the narrative along its axis mundi (or axiom). These may arise in the moment or come much later. It doesn’t really strike me as a Herculean labor, rather more of a natural wandering, almost as if I were walking though a familiar landscape: a forest, a cove, a plain, a valley (there you see that sense of filling in space along a stream of words). Ernst Halter rather aptly explained his own process as one of traversing a great body of water and somehow having a second sense as to where he might encounter the next atoll or islet. The journey itself then becomes the network or web that links these islets into a Oneness. It is a kind of working in reverse: knowing the goals, but not quite knowing their precise location. Only after the journey can the map be drawn and charted. (Interesting to note that my mother’s father was a surveyor and cartographer. I still have his fifty-year-old brass theodolite in the bottom of a trunk somewhere.)

One thought on “Marc Vincenz: Three Translations & an Interview”