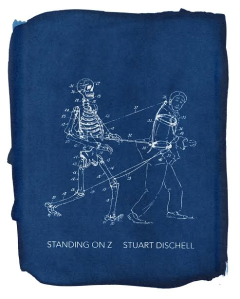 Okla Elliott: I notice that several poems in Standing on Z make use of repetition and that the repetition is often of a word that is generally considered negative—e.g., “forget” in “Questions for the Mariner” and “dead” in “Threnody.” Would you mind speaking to the repetition of these particular (types of) words and repetition in poetry more generally?

Stuart Dischell: Repetition is at the heart of poetry. It is its heartbeat. I’m talking about sound the repetition of sound and syntax–whether the metrics of formal verse or the breath-lines of free verse. The obvious difficulty in working with repetition is that it can be repetitious in the sense of boring, in the sense of a parent saying the same things in the same way over and over again or a child banging a spoon on the table. In a good poem that employs repetitions, the words, lines, or phrases take on nuanced meanings and repercussions. I have never been one to write villanelles or sestinas—those obsessive forms of which there are few really fine examples—but lately I find myself working with the pantoum and triolet. Repetition is memory. Or maybe I am just getting older and find myself repeating myself. What?

OE: Authors are often asked to give advice to beginning writers, which makes a lot of sense, but I want to take a different approach. What advice would you give to an early-career writer with, say, one book out and a decent first job? Which sorts of problems do you think are peculiar to writers at that point on the writing path?
.
SD: To start, I would say, “congratulations.” Publishing a book of poems is not easy nor is getting a decent job. That said, I would advise keeping to first principles, the things that “bid you to write poetry” as Rilke wrote in Letters to a Young Poet. Keep your totemic books around you, the writers that first got you going, and newer books too. Stay curious. Remember there is the imagination. Don’t understand your own poems so well. Don’t get too cozy with only poets of your generation. Remember there is always the imagination. Be playful but never forget that the writing of poetry is not a game. People have died for it.

OE: If you could change one thing in the literary/publishing world today, what would it be? I mean a-genie-just-gave-you-a-wish kind of scenario. Anything goes.

SD: Gee whiz, Genie, I don’t know what I would change. Poetry appears to be published everywhere online and in print. Although there may be perceived centers of power (mostly perceived by those dwelling in those centers) American poetry has become the most democratic of the arts. Journals and presses represent every perspective, aesthetic, and region—many within the same publications. Poems in “start-up” online journals are frequently read more than work in established literary journals. Gorgeous books are being printed by small presses, and as poetry becomes more frequently read online, there seems to be greater interest in the artisanal.

The end of the jetty is like the end of our language.
Nothing is ahead but the open sea.

Who said there should not be more letters in the alphabet?
The jetty would be longer if we spoke Chinese—

Suggest the graphics of their respective anatomies.
(Yet in my handwriting one looks like the other).

I am thinking of the romance of m and w by the sea.

What do you think they said in the hot sand of creation?
What would their last words be?

After a Late Show

A gob on the sidewalk
Refracts the lights
Of cars and bar signs
And theatre marquees.

The locked hands
Of couples pass over it,
A dog sniffs, and a child
Running in pink shoes

Ahead of her folks
After a late show
Calls it a jellyfish
And squashes it.

Some brightly decorated passages
Lively and fluorescent until dawn
Like stars are hidden in the daylight—
No signs, no numbers, no names.

I have a favorite pair of shoes
Manufactured in Argentina.
There is nowhere I wish to walk
In them but down those passages.

Stuart Dischell was born in Atlantic City, NJ. He is the author of Good Hope Road, a National Poetry Series Selection, Evenings & Avenues, Dig Safe, Backwards Days, and the chapbooks Animate Earth and Touch Monkey. Dischell’s poems have been published in The Atlantic, Agni, The New Republic, Slate, Kenyon Review, Ploughshares, and anthologies including Essential Poems, Hammer and Blaze, Pushcart Prize, and Garrison Keillor’s Good Poems. A recipient of awards from the nea, the North Carolina Arts Council, and the John Simon Guggenheim Foundation. He teaches in the MFA Program in Creative Writing at the University of North Carolina Greensboro.