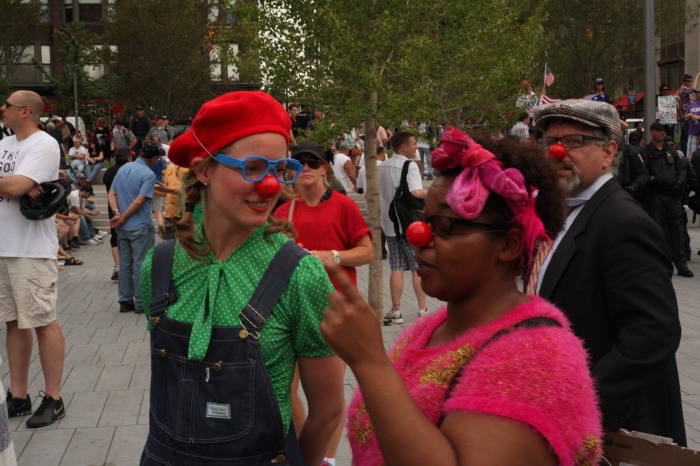 (text and photos by Okla Elliott)

We were driving around downtown Cleveland, navigating the blocked-off roads and foot traffic, when Robert’s police scanner app informed us that a major disruption was underway and police reinforcements were requested. Robert and I  jumped out of the car and began gathering camera equipment, as Turner ran around the car and got in the driver’s seat. Turner drove off in search of a parking spot. As Robert and I ran, he was assembling his video camera — mounting it and attaching the mic, the lens, and so forth — with some difficulty. (You try running through a crowded downtown while assembling a video camera set-up sometime.) Despite fear of missing important footage, we stopped to allow Robert time to properly assemble his gear. All of this, from the jumping out of the car to assembling the camera, was a bumbled action sequence from a Hollywood movie.

[Side note: One of several things I have learned covering the convention is that nothing ever — and I mean ever — works as smoothly as you imagine it will, and certainly not as smoothly as it does in the Hollywood imagination.] 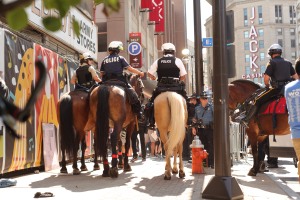 When we had finally made it across Public Square and down a small side street to where the commotion was, it turned out that members of the Revolutionary Communists had set an American flag on fire and were now surrounded by mounted police. We were therefore presented with a wall of horse-flesh and piles of horse manure scattered about. You’ll have to wait for the video dispatch, but Robert got some good footage of the arrest, as he ended up accidentally shuffled behind the horse-wall (which is now a word to me) by the 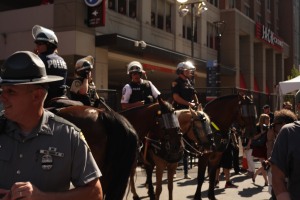 police. I got a few photos of the horses and police, from where I ended up.

[Side note: One thing that happens to you a lot at these sorts of crowded protest-laden events is that you get moved around a lot, either with a gentle yet firm force by the police or just by the random flow of the crowd. Robert and I got utterly separated within seconds of arriving at the disruption and wouldn’t find each other again for nearly an hour.]

There were protesters of great variety present, though perhaps my favorite was a woman who merely lounged on the steps of the Public Square, proudly flaunting her lushly overweight body. When I asked permission to take her photo, I also asked her what she was protesting or supporting here. Here answer: “I’m not interested in protesting or 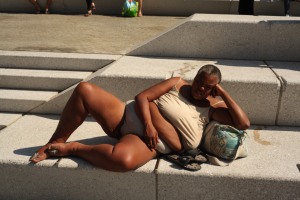 supporting. I’m just enjoying this sun here in this open space.” It was therefore not so much a direct protest of any policy or party, but rather a positive message of body positivity and enjoyment she was promoting.

And this is another point worth making about the protesters at the convention: only a small number were directly protesting the RNC, around a fourth, I’d say. The rest just wanted attention for their cause or, in the more cynical cases, for themselves and were using this massive public event as a platform. 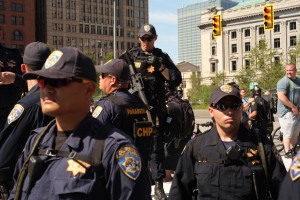 agenda was when a group of rightwing Christians — think Westboro Baptist church types — set up a demonstration simply to yell about how gays were going to hell and how AIDS was righteous punishment from God.

Interestingly this demonstration had by far the greatest amount of police protection of any I saw in my three days in Cleveland. It also received the greatest resistance from the crowd.

[Side note: Something you should know about how demonstrations worked at the convention is that each group had to apply for permits to demonstrate at a particular location and for a specific time slot. Given the limited space provided, you got a turn

But if there is one rule of protests, it’s that for every protest group, there is an equal and opposite protest group. On the opposite side of the square was another Christian group, Healing Prayer, making a demonstration, but this time of love not hate. They played acoustic guitar and sang happy songs; they offered to pray for people in need; they hugged passersby freely. 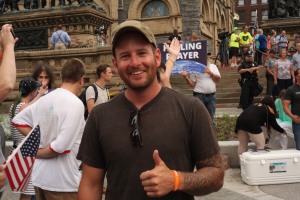 When I walked up to get a few photos, a man named Kevin (pictured to the right here) approached me and asked if he could pray for me.

“I recently learned I have diabetes.”

And Kevin put his hand on my chest and gave a thoughtful and heartfelt prayer. And either he is the best actor in the world, or he was sincerely tearing up near the end of it. (I lean toward the latter.)

I’m sure whether one group cancels out the other or if some political/theological balance was restored to the universe by both groups being present, but I do know that rarely can you find such diversity in one location and rarely can see how a religious belief can be so starkly different in its enactment.

As Kevin said before I moved on, “Don’t you feel something different standing here with us? You feel love, right? Jesus loves you. Hell may be real, but I know this love right here is real. I can feel it. Do you?”

Okay, so every time I mentioned to a friend or family member that I was covering the RNC 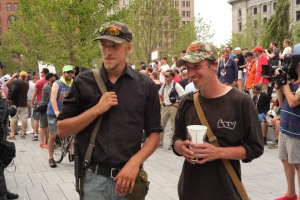 convention, the first, third, and seventh thing they said to me was, “Be careful there.” The media played up the potential violence, with armed protesters and armed supporters reported to be present. Even I was worried before I arrived. As it turned out, the New Black Panther Party didn’t show up en masse and armed, as promised, and the open-carry people present were really just photo ops for people like me. They spent almost the entire time posing for photos and offering platitudes about freedom and the found fathers.

Violence was nearly nonexistent at the convention and among the protesters, in fact, something that truly heartens me. I am happy to have been wrong, and I hope (though doubt) that the media will admit it was wrong to play up the possibility of violence, or at least acknowledge that the convention was remarkably civilized. The closest thing to incivility I saw was a group of grandstanding protesters on the final night yelling in the faces of cops in an attempt to create a spectacle and garner attention for themselves.

[Side note: It worked in a way. There was practically no immediate audience for their antics, but about a dozen people were filming and photographing the self-aggrandizing charade — Robert and myself included — so I imagine they’ll be able to get the attention they so obviously craved, even if only after the fact.]