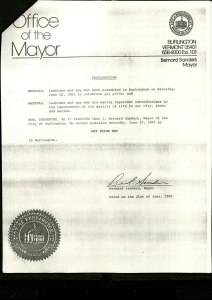 The above image is of Bernie’s declaration of a “Gay Pride Day” in Burlington, VT in 1985. I was born in 1985, which means that this man has been advocating for my civil rights my entire life. As we near the democratic primaries, I believe it is important for the LGBT community to consider the value of such a long history of support. I don’t want to vote for a candidate that only chose to recognize my humanity when it became politically expedient. I want to vote for a candidate who has been standing up for me since day one.

To fully understand what these 30 years of advocacy mean to me, it’s important to contextualize what standing up for LGBT rights entailed in the 80s. In 1985, the LGBT community was struggling through one of its great tragedies, the AIDS epidemic. In the four years since its first documented case in 1981 (then called the “gay cancer” and later “Gay Related Immune Deficiency”) AIDS ravaged the community and claimed thousands of lives. The AIDS epidemic spurred a public panic. Little was known about the disease or its transmission other than its association with gay men as its principal victims. Just days after Bernie Sanders signed this proclamation of a “Gay Pride Day”, Ryan White, a teenager from Indiana who contracted the virus from a contaminated blood treatment, was expelled from his school due to fears he could be contagious.

While the American people’s fears stirred into a frenzy, the government’s response to help those affected by AIDS was notoriously slow. Despite thousands dead, President Reagan did not even mention AIDS until months after Bernie’s proclamation. The modern Gay Rights Movement born in the late 60s had achieved some small victories for LGBT rights through the 70s, but the AIDS epidemic threatened to erase their advances and reinforce the bigoted view of the gay man as both mentally and physically ill. Advocating for the humanity and dignity of LGBT people in the middle of the AIDS crisis meant standing against an overwhelming surge of hate, ignorance, and fear. While I applaud all allies who today advocate for LGBT liberties as courageous individuals, I must say that to do so in a time when gay men were stigmatized as plague rats and evangelists referred to AIDS as a gay punishment, required not just courage, but a bold, almost radical commitment to the belief in the principle of equality.

Yet Sanders’ statement went beyond simply stressing the humanity of these men and women. Sanders asserts “lesbians and gay men are making important contributions to the improvement of the quality of life in our city, state, and nation.” To Sanders, they were not just victims to pity, but integral members of a society that was being diminished by the great loss of LGBT talent and leadership due to AIDS. We preach tolerance in America, but mere tolerance is insufficient to deliver equality. Tolerance is just the act of allowing someone to exist. The AIDS epidemic could never be conquered through tolerance; it required compassion and an appreciation of the lives of those touched by it.

Though one could contend that the stakes of supporting LGBT rights for a mayor in Vermont were considerably lower than for a higher profile politician, it’s important to note that Sanders faced considerable opposition to his proclamation. When Sanders signed a letter of support for Burlington’s first Gay Pride celebration in 1983, the measure was met with protest. According to Paul Heinz:

Opponents, such as Alderman Diane Gallagher, a Ward 6 Republican, questioned why the march required official recognition.

“Can’t you just go out and have your party and enjoy yourselves and make your point without asking the city to have a proclamation?” she asked.  (Seven Days)

Letters to the editor were less cordial in their disapproval:

Some of them went after Sanders — particularly in letters to the editor published in the Free Press.

The mayor’s “support for ‘gay rights’ and the city’s support is giving this town a bad name,” Burlington’s Patrick McCown wrote. Essex Center’s Stephen Gons questioned why the city wouldn’t designate a day for Nazis if it was willing to do so for gays. (Seven Days)

Along with his 1985 proclamation of a Gay Pride Day, Sanders and the Board of Aldermen passed a housing non-discrimination ordinance. In a letter to the community, Sanders explained his support:

“It is my very strong view that a society which proclaims human freedom as its goal, as the United States does, must work unceasingly to end discrimination against all people.

I am happy to say that this past year, in Burlington, we have made some important progress by adopting an ordinance which prohibits discrimination in housing. This law will give legal protection not only to welfare recipients, and families with children, the elderly and the handicapped — but to the gay community as well.” (Scribd)

It is this kind of thinking about LGBT rights- the ability to see how issues like housing that are not directly related to sexuality or gender still uniquely affect LGBT individuals- that makes Sanders such a promising candidate. The LGBT community is intersectional, meaning that its members are affected by all of the other forms of discrimination present in our society. LGBT people come from all walks of life, thus issues about race, social class, immigration, and religion among many others are LGBT issues. It is crucial to understand how issues not specific to gender or sexual identity affect the cause of LGBT equality. LGBT people need access to education, health care, and a living wage. The right to marry a partner of the same sex is important, but LGBT people struggling with poverty need leadership committed to vision of social justice that sees us as whole individuals affected by all aspects of American politics and not just as an interest group defined by a single cause.

Recently, The Human Rights Campaign, the most influential LGBT organization in Washington, formally announced the endorsement of Hillary Clinton over Bernie Sanders in the race for the democratic nomination. For those who have long followed the HRC, this was of little surprise because they have a history of supporting the establishment and focusing on a narrow view of LGBT issues. In 2011, The HRC awarded Goldman Sachs their “Workplace Equality Innovation Award.” (Huffington Post) In doing so, the HRC sent a clear message that their advocacy was aimed only at the interests of the most privileged of LGBT people. In praising the protections given to the handful of LGBT people who participated in Goldman Sachs’ predations on the American economy, they ignored the thousands of LGBT people who lost their jobs and homes due to the irresponsible greed of poorly regulated investment banks.

The HRC-Goldman Sachs-Clinton relationship represents a disturbing turn in LGBT politics toward the interests of the privileged over those of the community’s most vulnerable members. Goldman Sachs and other corporations used LGBT protections like domestic partner benefits to maintain the veneer of benevolence and progressiveness in the hopes that we ignore how their corporate greed has undermined many of our other civil liberties.

When I hear Sanders explaining his arguments about issues like overhauling the regulation of our financial institutions, I hear someone who is opening a space for my liberties as an LGBT person. When Sanders criticizes Citizens United and argues against the influence of big donors on the political process, I see someone who is committed to making our representatives more accountable to us. LGBT issues will be better heard and addressed when our voices aren’t drowned out by the Koch Brothers and the Sheldon Adelsons of the world. When Sanders argues for better access to education and free admission to college, I envision a better educated population less prey to the bigotry that often accompanies ignorance.

Sanders’ support for a Gay Pride Day in the 80s is just one small part of an overall philosophy of government attentive to the complicated ways in which different populations are affected by political decisions. It is one thing to voice one’s support of LGBT people, but it is quite another to demonstrate an understanding of how LGBT inequalities are generated by our political system and how they uniquely affect our community, especially when it means criticizing entrenched economic behemoths. It’s the difference between condemning an evil versus studying the roots of what causes that evil to develop. Marriage Inequality did not create homophobia, but rather marriage inequality was a symptom of homophobia caused by a nation living in an unequal system. It is Sanders’ commitment to addressing the economic, political, and social roots of inequality that will most benefit the future of LGBT rights.