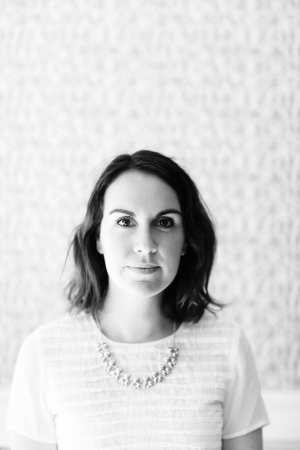 We said it Friday nights in unison: blessed
is Abraham, Isaac, patriarchs whose weight
we felt against our chests, Jacob, whose brother

filled his mouth with the sand of hate,
who split sisters with his body
of patience. The God of History, reads

the Siddur, nothing more dangerous
than this sort of God. Any good girl
will tell you so: ask Leah, who watched

as her betrothed tilled fields in agony,
rutted at her nightly, his pious bride, as he dreamed
for seven years of younger Rachel’s face. God,

our brute teacher. God, whom we thank
and thank for these big men. You are mighty forever,
my Lord. You resurrect the dead. My Lord, open

my lips, that my mouth may declare
Your praise. Imagine the shock, that first boy
or man inside us for mere seconds, the tremor

of realization — some smaller God at our clavicle
thrumming in awareness. The creator of all things. And so
when I lie with him, my body already knows what to do

while he shifts his weight, moves his hips. You cause
the wind to blow and the rain to fall. The hard ram’s horn,
the arms thrust high, parting a sea of salt. The open mouth

of incantation. O King, helper, savior and shield. And what of our
pleasure, that quiet subtext, that patient search against
our partners’ sweaty brows, near to finished? We already

Wet pink shock of a sliced-open
peach, pit hard between our teeth,
reached in a liquid, honest hurry.
Peach in the fingers of a certain lover’s hand.
Peach juice sliding down the wrist of a man
with assertive hungers. Peach, bringer
of rapture: the climax, but not
the fall. Peach sky rising up and up, free
of consequence. Impossible, but for
our chase of it. Peach in the crisper drawer,
softening. We hear stories of the pastor
and his book, so certain of fire, his biblical
calculus. Peach hot, sugared in an oven.
The mouth of red around the brain-
shaped, dumbstruck stone. Peach the very taste
of sin. Peach that sends the crows circling,
rapture here and gone. Peach God, rapt for carrion,
turning above us in the heavens, waiting for
us, ripening, to satisfy ourselves;
come to him pitted, come to him
finished, made rotten by
your sweet time in his sun.

Rachel Mennies is the author of The Glad Hand of God Points Backwards, winner of the Walt McDonald First-Book Prize in Poetry (Texas Tech University Press, 2014), and the chapbook No Silence in the Fields (Blue Hour Press, 2012). Her poems have appeared in Hayden’s Ferry Review, Poet Lore, The Journal, and elsewhere, and have been reprinted at Poetry Daily. She teaches in the First-Year Writing Program at Carnegie Mellon University.

Editor’s Note: I really love today’s poems. Discretely and in conjunction. For the ways they press against the same themes, and for the ways they diverge. “Amidah for Teenage Girls” had me at “patriarchs whose weight / we felt against our chests,” and held me there, exalting, with “Jacob, whose brother // filled his mouth with the sand of hate, / who split sisters with his body / of patience.” Yes. Yes and yes. I could write pages about the first two stanzas of this poem alone. Instead, I urge you to read and reread it, to savor what stews and what simmers.

When I think of peaches and poems, I think of Li-Young Lee. And while “Bumper Crops” and “From Blossoms” each make their own unique contribution to the poetic landscape, I think Li-Young Lee would meditate along with Rachel Mennies on God and humanity, and that he would relish the poem’s sweet sensuality. As, I believe, would Anya Silver and Rabbi Rachel Barenblat, whose “French Toast” and “Sufganiyot” would, along with Mennies’ peaches, make up a picnic that would give Fifty Shades of Grey a good blush.