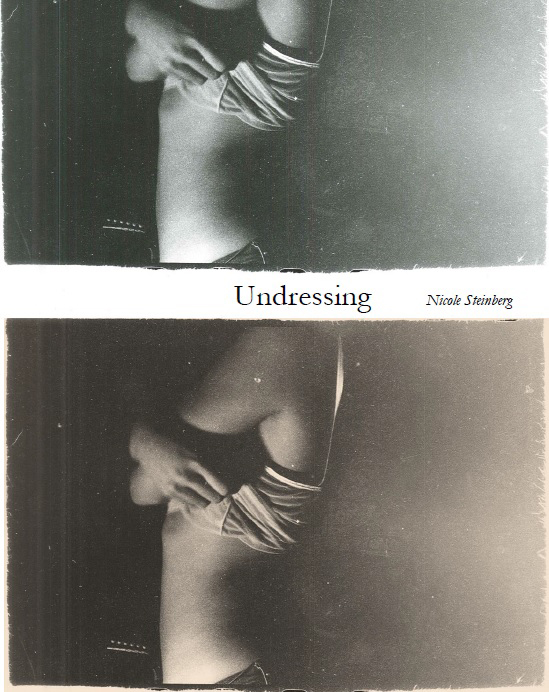 from UNDRESSING
By Nicole Steinberg

is a ritual, passed
along in slow drags
of the fingers—foundation
swept across cheekbones
in runny smears, stark
beige until it blends.
Salt, pepper, and ashtrays;
we keep the kitchen
warm with smoke and
sweet, still-wet hair.
A silver lipstick tube
rolls ribbed between us.
One day I’ll carry
your bones in sacks.
I’ll remember cotton
pressed into your eyes
and up your nostrils. I’ll be
sorry they ever listened,
when I said I wanted
to see you that way.
You switch to violet
lips after some years,
which clash with your
bleached hair. I miss
the old burgundy outline.
Draw lines to prevent
bleeding, you once explained.
Hold back the color
of your mouth and
every careless thing
it wants to say.

I took my dark, Semitic wiles on the road.
The train was empty and that was lovely,
everywhere an open space. En route to Berlin,
I held the bathroom mirror and spoke
to my mother, foreign leaves of foreign trees
and the conductor’s garbled nothings
blurred above my head. She thinks I’m going
to get myself killed. Lost forever. I remember
a straight-haired little girl at the kindergarten
table with eyeglasses as petite as her pink
Polly Pocket. I crushed them in my fat hand,
arranged the lozenge lenses next to the legs,
purple plastic bird femurs. Like chicken,
I picked it apart. My fellow passengers,
the unwed Jewess rides among you, come
to tour your capital of tragedy. Love me
out of guilt like an unborn sister, a mother’s
final scowl before death, the very nose
on your face you’d hack off just to belong.


THERE IS NO ROMANTIC

Truly, everything is monstrous,
even wild horses and especially
their heads. The tree trunk necks
of boys who finish sandwiches
in three bites and the impatient
lumps that harden in their freshly
bleached briefs. We’re all so warm
and pink, it’s obscene. I don’t want any
part of it. It took me years to learn
simple tasks: how to snap my fingers,
tie my shoes. My mother’s early gaze
full of worry that love would escape
me, too. If I peel back my breast, I’ll find her
passport heart, stamps still smeared
from all the quailing in Queens, the tears
in Tel Aviv. She taught me this: the way
a woman travels, under a moving
shadow of small panic; all too aware
that even a plane about to crash,
for one bright, myopic moment,
will fill completely with the sun.


Nicole Steinberg is the author of Getting Lucky, now available from Spooky Girlfriend Press, Birds of Tokyo (dancing girl press, 2011), and two new chapbooks in 2014: Undressing from dancing girl press and Clever Little Gang from Furniture Press, winner of the 4X4 Chapbook Award. She is also the editor of an anthology, Forgotten Borough: Writers Come to Terms with Queens (SUNY Press, 2011).

Editor’s Note: I love chapbooks. And small presses. And books that are little works of art to hold in your hands, open, and immerse yourself in. Undressing is such a book; one of 200+ books made to date by dancing girl press, which publishes titles “by emerging women poets in delectable open-run handmade editions.” Delectable. Yes. From its beautiful cover art to its textured binding and hand-cut pages, this is the kind of creation that can never be replaced by an ebook.

Within its pages, Undressing is just that. The poet sheds her veils like Salome, stripping off not only clothes, but skin, revealing the raw bits of flesh and bone, organ and memory, that comprise an inner life. At times Nicole Steinberg looks at herself critically, as a woman does when considering her reflection in a mirror, her point of view filtered through a smog of American cultural misogyny. At other times Steinberg puts on the dress of her mother, of illness and loss, of the guilt and introspection and distortion that remains.

Amidst a maelstrom of pop culture, feminism, religion, sex, relationships, and memory, there is something hectic in these poems, like the pile of clothes at the foot of a bed. But amidst the torrent there are moments in which the poet forces us to slow down and face the reality she unveils head on. There are lines so poignant they wash over their more topical surroundings, forcing us to breathe and remember we are engaged with an artifact: “Draw lines to prevent / bleeding, you once explained. / Hold back the color / of your mouth and / every careless thing / it wants to say.” “She taught me this: the way / a woman travels, under a moving / shadow of small panic; all too aware / that even a plane about to crash, for one bright, myopic moment, / will fill completely with the sun.”