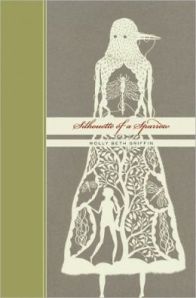 A Review of Molly Beth Griffin’s

Silhouette of a Sparrow

On your next trip to a bookstore, check out the YA section (if you weren’t already planning to), and conduct the following experiment: Find the books targeting female readers. You may notice a pattern—covers that feature female figures, dressed fashionably (sometimes in fantasy/period garb), with long, windblown, straightened-then-curled hair. Their bodies are thin and seductively posed, sometimes alone, sometimes alongside a dashing male figure, sometimes almost-kissing said male. Oh, the toils of needing boys. In many cases, these attractive female bodies are effectively faceless—their faces are turned away or hidden in shadow or cropped out entirely—and when they do have faces, the lips are plump, the eyes seductive, and floating near them are saucy captions like Love will kill us all or Is true love worth the ultimate sacrifice? Now, these books may well contain progressive, non-problematic messages—admittedly, I don’t tend to read them—but perhaps a book design pattern this blatant points toward a problem in (some) YA literature: Female readers being told how to be sexy for men.

For this reason, novels like Molly Beth Griffin’s Silhouette of a Sparrow are especially important. The story, set in 1920s Minnesota, follows sixteen-year-old Garnet who, while spending the summer with relatives in the resort town of Excelsior, encounters a vibrant and impulsive flapper. They become fast friends, and Garnet, a proper, rule-abiding young lady, soon finds herself lying to her aunt and cousin and sneaking out to spend time with Isabella.

Though Silhouette of a Sparrow is “meant” for young adult readers, its relevance and lyricism make it a poignant read for adults as well. By juxtaposing Garnet’s family life—that of postwar wealth and Victorian-esque stifling of female independence—against her growing romance with Isabella, Griffin weaves a coming-of-age story that is as nuanced as it is poignant. Her hero glimmers with youthful wisdom and honesty, and her lyricism leaps from the page. The book opens:

I was born blue. Life ripped me early from my safe place and thrust me into the world. It was all so astonishing that I forgot to breathe.

This is a character who, from birth, has been acted upon forcibly by “life.” Yet as her dramatic summer unfolds, Garnet begins to claim her own agency—“I was free from the confinement of ‘home,’ free from idle hours and dull company and mundane work”—and, in doing so, realizes the impact agency has on her self-understanding (a struggle that is, of course, deeply rooted in sexuality).

Throughout all this, Griffin engages the symbolic imagination through Garnet’s hobby—making cut-outs of the many birds she sees. When describing her silhouette-cutting process to Isabella, Garnet says it’s about seeing and deconstructing boundaries. “You have to see it differently. You have to follow its edges and know that it’s an egret only because it isn’t water or sky or beach.”

This is one of those books that entices and involves while simultaneously having real potential to do some good in the world. Floating casually among books with simplistic, privilege-reinforcing romances, this LGBT young adult novel asks the sophisticated questions: “Do we all change when we try to attract a lover? Do we all try to be more beautiful, or more bold, or more intelligent, or just more brilliantly ourselves?”

Jeff Moscaritolo holds an MFA from George Mason University. His short fiction has been published in Paper Darts, Carve, and Indiana Review (forthcoming). He lives and writes in Lincoln, Nebraska.