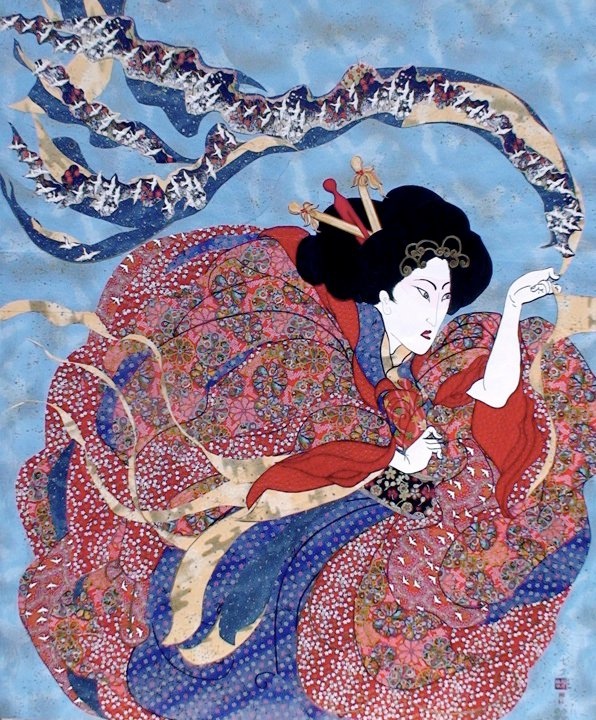 Now at Stanford University Art Space is the work of Nicole Lomangino, an artist whose personal translations and representations of geishas articulate a longstanding interest in Japanese art and myths.

The work seems deeply inspired by traditionalUkiyo-epaintings and woodblock prints of the Edo Period in Japan (late 1600’s-1800’s), which depict history, landscapes, theater, and pleasure quarters. The word ukiyo or “floating world” refers to impermanence and fleeting beauty.  The original subject(s) of ukiyo-e were activities and scenes from city life and the realms of entertainment — kabuki, courtesans, geisha — divorced from the world of the mundane. The prints were disseminated and affordable because they were mass-produced.

In translating her subjects — geishas — Lomangino has developed a strategy of blending figures painted with watercolor and gouache with a collage technique that utilizes handmade Yuzen papers to visually construct her subjects’ bodies, hair adornments, and kimonos, in a complex architectonic dance of textural patterns, form, and color.

In so doing, she creates works that depict solitary figures formed by reassembling and juxtaposing the painted images with the cut paper, so that the faces hover in a orchestrated sea of ebbs and flows that are seamlessly fused in a unitary whole.

In Tanabata, for example, a solitary figure floats against a cloudlike powder blue-grey background.  The figure’s face, left forearm, and hands emerge from a billowy mass of pictorially simulated fabric.  In her left hand, she holds an upraised streamer that appears to be blowing in the wind across the top portion of the image, above her head.

The patterns in the cut paper vary and include birds, which add to the allusion to in-flight travel or movement. This is reinforced by a cut streamer tied to the figure’s wrist, which similarly mimics the curvilinear flowing “fabric” overhead.

Here, the rendering of the geisha is anchored by the pale white face/head of the subject.  The face is crowned by her black hair, which is adorned with a curvilinear hair ornament above her forehead.  Below her chin and at the shoulders is the bulbous kimono-like garment formed from Yuzen paper that has been cut and pasted so that the edges demarcate and enclose the sections that constitute the folds of the “fabric” portions of the garment.

The intersecting lines that delineate these sections serve as devices for the dynamism created by the careful arrangement of the compositional structure and juxtaposition of patterns in the paper, creating tension, movement, and depth within the picture plane.

As in much of the work, the figure occupies an autonomous space that is at once nebulous and self-contained, formed from a formal strategy and mode of expression that characterizes many of her works — the conjuring of traditions and images from the past to enunciate aesthetic concerns in the present.

Looking at these images, one finds it necessary to reflect on Lomangino’s intercultural identification with her subject and the historical sources condensed in the works, and to wonder how the aesthetic strategies she utilizes comment on a history of globalization and relate to her personal experience(s).

In complex way, her choice to rearticulate images associated with the Japanese Edo period speaks to histories of European colonization that disseminated aesthetic ideas through cultural dominance, and in so doing created contact sites of intercultural exposure, exchange, influence, and transformation; and also how those contact histories are mutually generative of a range of aesthetic translations.

Perhaps more importantly, the work alludes to a personal aesthetic as being socially imbricated in the world, and is thus emblematic of the social character of art. By extension, it addresses the way people are formed through processes of acquiring, forming, and asserting subjectivities, and conversely, how personal identity is impacted by trans-cultural global realities.

This seems particularly relevant here, because these images speak to the idea that individuals and art works are relationally situated and constituted through cultures, people, and objects external to their being.