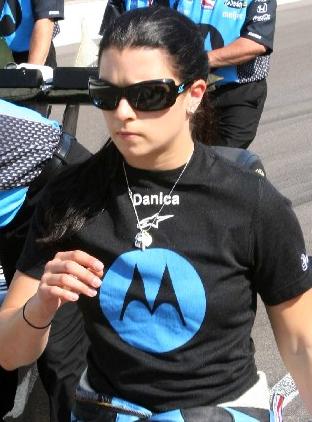 Danica Patrick Can Do Whatever She Wants With Her Body

Even if, like me, watching auto racing isn’t one of your top five (or top one hundred) favorite ways to spend a weekend, you’re probably at least aware of Danica Patrick, who in the last ten years has grown to be ubiquitous within the industry. A quick highlight of her many accomplishments: In 2009, she placed third at the Indy 500, and she won the IndyCar Series’ Japan 300 in 2008. In this year’s Daytona 500, she was the fastest pole qualifier (the first female racer ever to earn this spot) and in this same race became the first female to lead a lap in the NASCAR Sprint Cup Series (she lead five). This contributed to her finishing the Daytona 500 in the top twenty percent, in eighth place. There’s plenty of debate among racing enthusiasts about whether or not these feats legitimize her as a talented driver (for the record, I’m saying they definitely do), but either way she’s the most successful woman in the history of American auto racing, and that’s a pretty big deal.

Danica Patrick is also a spokesperson for GoDaddy.com. Recently, Laura Helmuth at Slate’s Double X wrote an article expressing her outrage over Patrick’s participation in her most recent Go Daddy Super Bowl ad. Unlike previous ads in which Patrick has appeared in a towel or glittery lingerie, Patrick narrates this ad entirely covered (dressed in leggings and a leather jacket). Meanwhile, model Bar Refaeli and actor Jesse Heiman—representing beauty and brains, respectively—make out, an analogy for how perfect things can be when the sexy side and the smart side of the tech industry combine under the Go Daddy umbrella.

“Offensive commercials are everywhere,” says Helmuth, “and there’s only so much outrage to go around. But people are right to be pissed at Danica Patrick. She squandered the good will of a multitude of fans who wanted to see a woman win at what used to be a man’s game.” Helmuth builds her argument around the idea that Patrick is doing a disservice to women’s lib by agreeing to sometimes get sexy on TV, even going so far as to call her a “harmless, hair-flipping mascot.” But here’s the thing: Danica Patrick can do whatever she wants with her body—it’s her choice—that’s the beauty of feminism. There’s space for Patrick to be both a talented driver behind the wheel and a sexy, flirtatious woman behind the camera.

Helmuth calls the most recent Super Bowl ad “sexist and stupid,” and she’s correct—it is both of those things. Those adjectives can be applied to many of Go Daddy’s commercials. But I don’t see anyone arguing that Bar Refaeli needs to hang up her modeling career in favor of focusing on her current business venture in order to encourage young women to apply their intelligence and savvy toward becoming international business moguls. Helmuth, in her article’s subtitle, argues that Patrick is setting back the women’s moment, but if that’s the case, then Helmuth is most certainly guilty of doing the same, particularly when she instructs Patrick in the article’s headline to just “shut up and drive.”

I’ve seen plenty of photo spreads of tennis phenom Maria Sharapova in a bikini, and I don’t find her to be any less of an athlete for it. The talented Venus Williams stunned crowds at a 2010 French Open game when she showed up wearing a fun and unique cancan-dancer-inspired outfit that looked like something she could have picked up at Victoria’s Secret. She went on to win the match and several subsequent rounds before her elimination on day eight, but I don’t see her being called a “harmless, hair-flipping mascot.” Soccer star David Beckham and tennis ace Rafael Nadal left very, very little to the imagination with their Armani underwear campaigns, but no one claimed this made them irrelevant to their sports.

There’s another important aspect to Patrick’s actions that Helmuth completely overlooks in her article. Sports reporter Jenna Fryer comments on this aptly: “Nobody gets a job driving race cars at the top level without sponsorship, and those who successfully find a corporate partner will always get the rides. Every single week, in a series somewhere, there’s a driver on the track only after finding enough sponsorship to buy the seat for that particular race.” She also adds, quite pointedly, that “[i]t’s doubtful anyone has ever paid attention to what five-time NASCAR champion Jimmie Johnson has worn to a press conference, but one publication noted that Patrick wore ‘orange hooker heels’ to last Thursday’s announcement.”

And so what if she did? Patrick faces sexism from the racing industry, from sports anchors, from celebrities, from talk show hosts, and likely from other racers. I cannot imagine telling a woman who complained about sexist behavior in her office to just buy a more conservative blouse, put her head down, and focus on her expense reports. In the face of this kind of misogyny, we don’t instruct women to shut up, to cover up, to stop being themselves, or to do anything that might make it easier for her naysayers to forget she’s a woman. In fact, outside of the most dangerous or life-threatening situations, we almost always encourage the opposite. Rather than adding another tired, critical voice about Patrick’s wardrobe choices, we should champion for Patrick to navigate both of these selves fluidly and with our full support.

We are all accountable to each other, and in the spirit of that sentiment, it’s my hope that anyone in the limelight uses that platform to do good things, to be a positive role model, to advance causes that help others, and to teach young men and women to respect themselves and each other. What I see reflected in Patrick’s actions is someone who feels capable and self-assured enough to put her best foot forward in the worlds of both racing and modeling, who doesn’t feel she has to sacrifice one interest for the other, and who is comfortable in her own skin, whether that skin is under the full coverage of a firesuit or simply a bath towel. Slut-shaming Danica Patrick for not donning only turtleneck sweaters off the track isn’t setting a great example for the next generation of potential female racers either.

In 2008, Patrick appeared in a GoDaddy commercial featuring a girl who aspires to be a professional racer. It’s my sincere hope that Patrick will take on an even bigger role in advocating for women to make their way in what has long been a “man’s industry,” but whether she does or doesn’t, she can wear pretty much whatever she wants.

Yes, many of those Go Daddy ads are cheesy and sexist. Yes, I love that Sarah Fisher runs her own racing team and that Lyn St. James founded a program to train girls to race, and yes, I hope Patrick takes a few pages from their books and does more to reach out to young women, encouraging them to forge a path into the parts of our culture that are still traditionally dominated by males. But I also think it’s time to take a step back and reflect on the purpose of international protests like slut walk, about the current push to educate both men and women that the number of layers of clothing a woman is wearing does not correspond to how deserving she is of sexual assault. We need to do better to teach our daughters and sons—the next generation of feminists—that someone’s intelligence, skill, or success does not have to be mutually exclusive from the way they choose to celebrate their body.

Kirsten Clodfelter holds an MFA in Creative Writing from George Mason University (’10). Her work has been previously published in The Iowa Review, Brevity, Word Riot, Narrative Magazine (as the runner-up in their 2011 30 Below contest), Rock & Sling, and Hunger Mountain, among others. She is a regular blog contributor at Fogged Clarity, and she writes and teaches in Southern Indiana. You can read some facts about her at KirstenClodfelter.com.