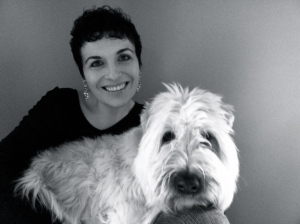 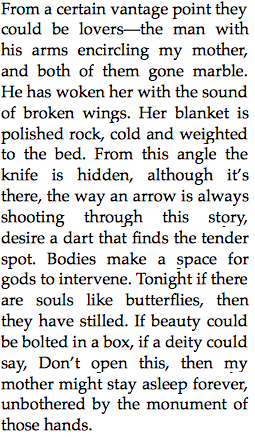 (Today’s poem originally appeared in AGNI Online and appears here today with permission from the poet.)

Jehanne Dubrow is the author of four poetry collections, including most recently Red Army Red and Stateside (Northwestern UP, 2012 and 2010). Her work has appeared in Southern Review, Crazyhorse, Prairie Schooner, and Ploughshares. She is the Director of the Rose O’Neill Literary House and an assistant professor in creative writing at Washington College, on the Eastern Shore of Maryland.

Editor’s Note: There are some days when I can’t help but think, “This is a damn good poem.” Today is one of those days. Today’s piece is rich and multi-layered. A poem which functions like Pandora’s Box—which it references—letting its good and its bad out with each lift of its carefully wrought lid. There is love and there is death. There is the threat of violence and the reality of violence. And all of this is enrobed in visual art—in painting and sculpture—and then again in a reportage style that nearly conceals the poem’s confessional nature. There are beautiful moments of lyric: “and both of them gone marble;” “Bodies make a space for gods to intervene,” and there is the myth which informs the piece like a hidden puppetmaster who knows exactly when to remind us of the strings. Dubrow even gets away with using the word “butterflies,” proving herself a powerful enough master of her craft that she can get away with what most of us cannot. This is a damn good poem.

Want to read more by and about Jehanne Dubrow?
Author Website
Poem on American Life in Poetry
Poem on Verse Daily
Poem on Poetry Daily
Reading on NPR