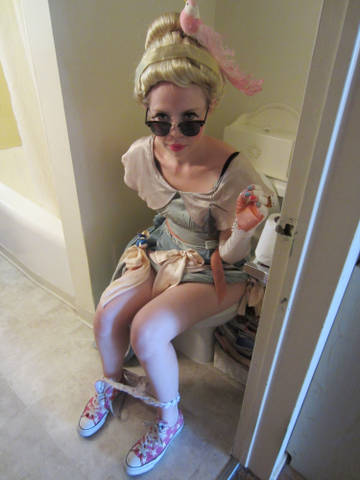 Editor’s Note: Welcome to the special Halloween edition of the Saturday Poetry Series here on As It Ought To Be. Today’s haunting is by the incredibly talented Kate Durbin, who inspires me to live every day in costume. Featuring Ms. Durbin on this series would be an honor for me any day of the year, but I couldn’t think of a more perfect occasion than Halloween. Her book The Ravenous Audience gives a nod to zombies, and Durbin herself can often be found inhabiting others and reanimating the dead.

Spring-stink, the world heaves with lust.
Mother sniffs sex from the kitchen window:

Not a world for little girls, she says,
Turning and smiling

Without teeth
(We are not sure Mother has any).

Little Red of the big eyes and tremulous lips,
Of the fox-fur stole Grandma sewed,

When will you tell Mother
Spring is slinking its way home?

Fleshnubs sprout under your clavicle;
A stealth forest slips across your secret holes.

Praying into flames,
You solicit hearth fire to singe this new fur,

Settle the stench of bright blood.
Some prayers are half-assed.

In the violet before-dawn,
You woke to stains on the sheets,

Vampire faces in your bedroom window,
Cheering you on with friendly fangs.

You were scared.
You weren’t really afraid.

Now, Mother orders you into the trees,
To deliver eggs and milk to Grandma,

Who too old, too useless to locate
Chicken crevices, clutch cow teats.

Will you follow the path, or will you stray?
Of course you stray, disoriented one—

Encounter your wolfprince,
Crash into his exposed teeth.

When you do, you don’t give it
All away, only whet his taste.

But what’s this?
At Grandma’s front door,

You coy smile up from the page,
Middle finger splayed.

Little Red, big bitch—clever, with that 60/40 animal sight,
A half-mile back spotting the paw in the window, beckoning,

And that doorknob no doorknob, Grandma’s tendons,
Whetted your taste.

Bloodthirsty, skinstarved, tantalizing reek of earthhairmeat—
Whose belly is howling?

We aren’t coming in,
Are we


(“Little Red’s Ride” is from The Ravenous Audience (Black Goat/Akashik Books 2009) and appears here today with permission from the poet.)

Sivan: The Ravenous Audience is, in part, a zombie reference, and the book features original zombie art by Marnie Weber on the cover. What are your thoughts on zombies and their role in your work?

Kate: These ancient archetypes of women that are constantly resurrected and projected upon women in our society—celebs in particular—are very much zombies. We re-animate dead ideas all the time. I say dead ideas namely because many of these notions of what a woman is and can be should be over and done with, as far as I’m concerned (such as the doting housewife—I mean, come on), but they aren’t. And not only are they not “over,” when they resurrect, things are bound to get as ugly as a zombie attack. I mean, just look at Lindsay Lohan, Anna Nicole Smith, Britney Spears, etc. And yet, zombies can do a lot of necessary destruction to a culture that is in desperate need of mutation and evolution. So bite on, zombie babes. Maybe we need you to destroy us.


Kate Durbin is a Los Angeles-based writer and artist. She is author of The Ravenous Audience (Akashic Books, 2009), E! Entertainment (Blanc Press, diamond edition, forthcoming), ABRA (Zg Press, forthcoming w/ Amarant Borsuk), as well as the conceptual fashion magazine The Fashion Issue (Zg Press, forthcoming), and five chapbooks: Fragments Found in a 1937 Aviator’s Boot (Dancing Girl Press, 2009), FASHIONWHORE (Legacy Pictures, 2010), The Polished You, as part of Vanessa Place’s Factory Series (oodpress, 2010), E! Entertainment (Insert Press, forthcoming), and Kept Women (Insert Press, forthcoming). She is founding editor of Gaga Stigmata, which will be published as a book from Zg Press in 2012. She co-curated a forum on women writers and fashion for Delirious Hem, SEAM RIPPER. Her performance Prices Upon Request was performed at Yuki Sharoni Salon in Beverly Hills, and Pardonmywhoremoans at BELLYFLOP gallery in L.A. She writes for Hollywood.com.

Want to see more by and about Kate Durbin?
KateDurbin.com
My review of The Ravenous Audience in Mayday Magazine