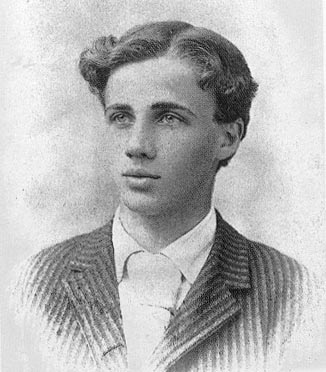 THE ROAD NOT TAKEN
by Robert Frost

Two roads diverged in a yellow wood,
And sorry I could not travel both
And be one traveler, long I stood
And looked down one as far as I could
To where it bent in the undergrowth;

Then took the other, as just as fair,
And having perhaps the better claim,
Because it was grassy and wanted wear;
Though as for that the passing there
Had worn them really about the same,

And both that morning equally lay
In leaves no step had trodden black.
Oh, I kept the first for another day!
Yet knowing how way leads on to way,
I doubted if I should ever come back.

I shall be telling this with a sigh
Somewhere ages and ages hence:
Two roads diverged in a wood, and I—
I took the one less travelled by,
And that has made all the difference.


(This work is in the public domain in the United States because it was published before January 1, 1923.)


Robert Frost (March 26, 1874 – January 29, 1963) was an American poet. He is highly regarded for his realistic depictions of rural life and his command of American colloquial speech. His work frequently employed settings from rural life in New England in the early twentieth century, using them to examine complex social and philosophical themes. A popular and often-quoted poet, Frost was honored frequently during his lifetime, receiving four Pulitzer Prizes for Poetry. (Annotated biography of Robert Frost courtesy of Wikipedia.)

Editor’s Note: Every once in a while it’s good to look back to the traditions and literary greats that are the roots of modern American poetry. Today is one of those days.

We began with the reading the poem appears to offer on its face, the idea that choosing the road less traveled in life is the better choice. On a second reading, and after hearing the poem read aloud by Frost, students offered that the poem has a tone of regret. Finally, after much debate, the class reached a consensus that the speaker in the poem is looking toward an unknown future, knowing only that one day he’ll see the choice he made in taking one path over the other as the choice that made all the difference in his life.

I see genius in the very fact that a reader might garner one meaning on a cursory reading, that the poem might then inspire debate among readers, and that, in the end, the group might conclude that the poem was always meant to be open to multiple interpretations. After all, when we look into our own future and contemplate what we’ll one day say when recalling our past, what do we really know at all?

Want to see more by and about Robert Frost?
Hear “The Road Not Taken” Read Aloud by Robert Frost
Poets.org
The Poetry Foundation
Famous Poets and Poems