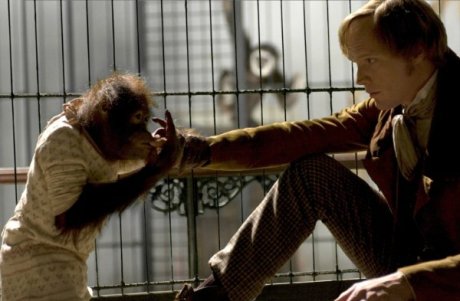 A Movie That’s “About Something,”
or Why “Creation” Isn’t a Great Movie,
But You Should See It Anyway
By John Unger Zussman

I was ambivalent about “Creation” even before I saw it. On the one hand, we desperately needed a movie about Charles Darwin in his bicentennial year. Evolution has become a religious and cultural flashpoint, and Darwin himself has been demonized. Only about 40% of American adults say they accept the truth of evolution. Our schools shy away from teaching it, and a raft of BBC and Nova documentaries haven’t been able to pick up the slack. We needed a movie that would humanize Darwin and explain evolution in a way that ordinary people would say, “Hey, wait a minute. That’s all it is? That’s not so bad.”

On the other hand, my wife Patti and I are screenwriters, and we had written our own Darwin screenplay which we hoped would do just that. We conceived it in 2006 and finished a reviewable draft (no screenplay is ever “final” until the movie is made) in 2007, in time (we hoped) for production and release in 2009. We called it “Origin” and it placed highly in several screenwriting contests. It won us a manager—representation in Hollywood is a big deal for screenwriters—and he submitted it to production companies both in the U.S. and Europe. Although it got some “good reads,” no one was willing to spend two years of their life raising money, attracting talent, making the movie, and getting it distributed. Then we learned that British producer Jeremy Thomas had bought the rights to Annie’s Box—a book about Darwin by Darwin’s own great-great-grandson, Randall Keynes—and watched as he recruited a screenwriter (John Collee) and director (Jon Amiel). When we heard that “Creation” had been financed and green-lit, we knew “Origin” was dead, at least in its current iteration. And I was jealous.

We knew it had been a long shot. Period dramas are notoriously difficult to get made, at least in Hollywood, and biopics (biographical movies) are especially problematic to write. People’s real lives do not often reflect the drama and story arc necessary for a good movie. That’s why successful biopics are usually heavily fictionalized or restricted to a brief but critical period in the subject’s life. We ourselves had used that tactic in a previous (and also, so far, unproduced) screenplay, “Trio,” about the love triangle between young Johannes Brahms, his mentor Robert Schumann, and Schumann’s wife Clara, a famous pianist. “Creation” used it as well, focusing on Darwin’s struggle to come to terms with the death of his beloved daughter, Annie, at age 10.

But for “Origin,” we decided we needed to portray the bulk of Darwin’s life, from his voyage on the Beagle, when he was a callow 22, until at least the great debate at the Oxford Museum when he was 51, after On the Origin of Species was published. Only a tale with such broad scope would trace Darwin’s own evolution, from his beginnings as an unpromising, upper-class youth, who studied for the ministry and believed the bible was literally true, yet was blessed with an overpowering fascination with nature—to the proponent of the best (and most subversive) idea in the history of science. Charles would be our proxy, a young creationist who nevertheless kept his eyes open and did not shy away from what they showed him. And so would his devout wife Emma, who abhorred the thought that Charles’s theory would prevent them from being together in heaven, yet who loved him too much to deny him his life’s work. It would be about a scientist and his theory, but really it would be a love story. We wanted it to be the “Brokeback Mountain” of evolution.

When we finally attended the San Francisco premiere of “Creation,” it fulfilled both our hopes and our fears. It succeeded in humanizing Darwin, and Paul Bettany was quite wonderful in the role. It found drama in Charles’s struggle to publish the work that he knew would polarize Victorian society and “break Emma’s heart.” And I had to admit that some of the scenes milked more conflict out of that struggle than ours had.

“Creation” was rather light on the science of evolution. This is understandable, since people go to movies (as our screenwriting coach keeps reminding us) to experience vicarious emotion, not for academic learning. It is even forgivable, especially from a British point of view, since I’d bet that British schools (and the BBC) do a better job educating the populace about evolution than our American counterparts.

But “Creation” was also light on what Darwin called the “grandeur” of nature, and that is more of a problem, for that is what made him tick. And in bringing out the drama, portraying Charles as an angst-ridden neurotic and Emma as his stern, disapproving wife, it made them unsympathetic. Charles and Emma came across as human beings, but not necessarily ones you’d want to spend two hours with, when by all reports they were both interesting, likeable, and generous people. “Creation” ended up as a domestic drama, at times dreary, that happens to be about a scientist. It was far from what we’d tried to write—a heroic drama about a scientist who stumbles on a revolutionary theory and struggles to publish it despite the condemnation of his wife and his society. We wanted a movie that would engage both heart and brain.

Jon Amiel, the director, conducted an hour-long Q&A after the screening. Despite our issues with the film, we were impressed with his intelligence and craft. When I asked whether he thought “Creation” would change any minds, he said he hoped it would at least open them.

To do that, of course, people who don’t accept evolution will have to see it. There’s the rub. Big studio movies open across the country (and world) on thousands of screens—it’s called “opening wide.” “Creation” opened in January on seven screens in five of the most progressive cities in the country. It is gradually rolling out more broadly—it’s on 14 screens as I write this in early February, and will play 15 more in the next month, again mostly in cities. This is the narrowest of openings for an important movie.

In fact, “Creation” was almost not distributed in the U.S. at all. After its premiere at the Toronto Film Festival, the producers expected it would be picked up for major distribution and released during “award season.” But no one bit. Finally, a smaller distributor, Newmarket Films, courageously rescued it and chose its distribution schedule.

Amiel called movies like “Creation” “an endangered species” and cited two strikes against it from the beginning. One reason is that it’s a period drama, a difficult genre to sell in Hollywood (as mentioned above), despite the success (and awards) of movies like “Amadeus” and “Shakespeare in Love.”

But more importantly, Amiel said, “it’s about something,” and that sets it apart from studio fare, which seems primarily to be based on comic books or video games or toys. Studios these days are all about making “tentpoles”—movies that will hold up the heavy tent of their businesses—and building “franchises” (like Spiderman, Transformers, Shrek, Harry Potter, Twilight, Batman, and Saw) that will not only attract viewers to movie after movie, but also sell plenty of cross-licensed merchandise.

Of course, movie-making is a business as well as (one hopes) an art. We can’t begrudge the studios a profit on their work, or ask them to make or distribute movies they expect to lose money on. Moviegoers these days tend to be young, in their teens or twenties, and at the end of a long school or work week, they don’t seek out heavy dramas or movies that make them think. They want to be entertained, they want to laugh or be aroused or frightened. They want to have fun.

You’d think there would be plenty of older moviegoers, too—boomers like me, and other ages too—who grew up on great movies and might prefer period dramas. But our viewing habits are different (despite the efforts of my early-retired friend Dan, who singlehandedly raised the curve by seeing 139 movies in theaters last year). We tend to wait for movies to be released on DVD or television, which is not nearly so profitable for filmmakers or distributors. That’s why they cater to younger audiences.

A year ago, the buzz in Hollywood was that intelligent movies, movies aimed at adults— “adult movies” has another meaning, so the term I prefer is “movies for grownups”—were dead. Serious films with major stars like “State of Play” and “The Soloist” disappointed at the box office. Even 2008 Oscar nominees like “Doubt” and “Frost/Nixon” struggled. The studios were shuttering their specialty divisions like Warner Independent and Paramount Vantage.

Of course, Hollywood is fickle, and trends may be reversed in weeks. These days, the mood is slightly more upbeat, with grownup movies like “Up in the Air” and “The Blind Side” racking up decent box office and surprising many with their staying power. But audiences are fickle, too. Even “The Hurt Locker,” which some critics consider the best movie of the year, barely made back its modest $13 million cost in theaters—the latest in a line of Iraq war movies to disappoint. And the bodies are still falling; just last month, Disney closed its Miramax division. Amiel said that he doubted “Creation” could even get financing today.

Which is why I’m urging you to go see “Creation,” despite its flaws, if it’s playing in a theater near you. If we want to see quality movies, we have to vote with our feet.

In fact, if you can, see these grownup movies the weekend they open. (At posting time, “Creation” has now opened in most U.S. cities, but debuts in Phoenix and Tuscon are scheduled for March 5.) By some arcane calculus, Hollywood counts opening weekend box office results disproportionately. As I understand it, the distributor takes a greater cut of the gross on opening weekend than on subsequent showings. Or maybe Hollywood just wants its marketing budget to play a larger role in a movie’s success, before word gets around that it sucks. (A vain hope, in the age of Twitter and texting.)

This may seem like too much “inside baseball,” and you may not care how the movie business works. I can relate. But one thing we’ve learned from politics is that making changes to a system depends on understanding how the system works and how to get a message through. And the way to encourage more movies for grownups to be made is for grownups to go to the ones that are—however imperfect.

So I’ll see you at the cineplex. Or—since Patti and I are currently adapting “Origin” into a stage play—maybe at the theater.

3 thoughts on “A Movie That’s “About Something,” or Why “Creation” Isn’t a Great Movie, But You Should See It Anyway”