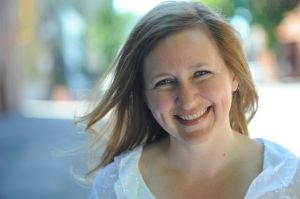 making love to your
husband who no longer

lives with you the night
before you leave for your

weekend retreat just
because he, having

agreed to overlap your
early departure to care

for your small son, appears
in the bathroom naked

and erect as you sit steeping.
What’s wrong with slipping

under the lifted wing he has made
of the covers, against the breastbone

of the bird your two bodies make.
What’s wrong with finding him

more beautiful at this distance:
lens adjusted to the immediate

taste of his tongue that has become
its own language since leaving you.

on a moonless night, this
pattern you have traveled by

dipping its cup
and spilling light.

(Today’s poem originally appeared in Rattle and appears here today with permission from the poet.)

Sage Cohen is the author of the poetry collection Like the Heart, the World from Queen of Wands Press and the nonfiction books Writing the Life Poetic and The Productive Writer, both from Writer’s Digest Books. She has published a variety of articles on the writing life in Writer’s Digest magazine, Poet’s Market and Writer’s Market. Sage holds an MFA from New York University and a BA from Brown University. Visit her at pathofpossibility.com.

Editor’s Note: Today’s poem artfully masters the element of surprise. Surprise in the story, in the words, in the phrasing. It makes beautiful what is socially censured and forces us, from the title onward, to question and to reconsider what is acceptable at the individual level. And as it asks us to rescind judgment, it delights in a lyric as delectable as the “sin” in which it engages. “What’s wrong with slipping // under the lifted wing he has made / of the covers,” it asks, and then leaves us to ponder the “taste of his tongue that has become / its own language since leaving you.”

Want to read more by and about Sage Cohen?
Buy Like the Heart, the World on Amazon
Buy Writing the Life Poetic on Amazon
Buy The Productive Writer on Amazon
Stirring
Sage Cohen’s Official Website