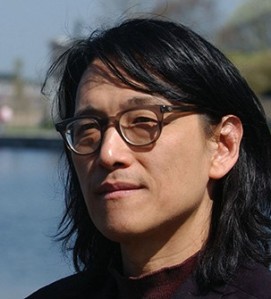 
from ALWAYS A ROSE

Not for the golden pears, rotten on the ground—
their sweetness their secret—not for the scent
of their dying did I go back to my father’s house. Not for the grass
grown wild as his beard in his lasts months,
nor for the hard, little apples that littered the yard,
and vines, rampant on the porch, tying the door shut,
did I stand there, late, rain arriving.
The rain came. And where there is rain
there is time, and memory, and sometimes sweetness.
Where there is a son there is a father.
And if there is love there is
no forgetting, but regret rending
two shaggy hearts.
I said good-bye to the forsythia, flowerless for years.
I turned from the hive-laden pine.
Then, I saw it—you, actually.
Past the choked rhododendrons,
behind the perishing gladiolas, there
in the far corner of the yard, you, my rose,
lovely for nothing, lonely for no one,
stunning the afternoon
with your single flower ablaze.
I left that place, I let the rain
mediate on the brilliance of one blossom
quivering in the beginning downpour.

Because this graveyard is a hill,
I must climb up to see my dead,
stopping once midway to rest
beside this tree.

It was here, between the anticipation
of exhaustion, and exhaustion,
between vale and peak,
my father came down to me

and we climbed arm in arm to the top.
He cradled the bouquet I’d brought,
and I, a good son, never mentioned his grave,
erect like a door behind him.

Truth is, I’ve not seen my father
since he died, and, no, the dead
do not walk arm in arm with me.

If I carry flowers to them, I do so without their help,
the blossoms not always bright, torch-like,
but often heavy as sodden newspaper.

Truth is, I came here with my son one day,
and we rested against this tree,
and I fell asleep, and dreamed

a dream which, upon my boy waking me, I told.
Neither of us understood.
Then we went up.

Even this is not accurate.
Let me begin again:

The old book I finished reading
I’ve since read again and again.

And what was far grows near,
and what is near grows more dear,

and all of my visions and interpretations
depend on what I see,

and between my eyes is always
the rain, the migrant rain.


Today’s poems were published in Rose (BOA Editions, 1986) and appear here with permission from the poet.


Li-Young Lee is the author of four books of poetry, including, most recently, Behind My Eyes. His earlier collections are Book of My Nights; Rose, winner of the Delmore Schwartz Memorial Award; The City in Which I Love You, the 1990 Lamont Poetry Selection; and a memoir entitled The Winged Seed: A Remembrance, which received an American Book Award from the Before Columbus Foundation and will be reissued by BOA Editions in 2012. Lee’s honors include fellowships from the National Endowment for the Arts, The Lannan Foundation, and the John Simon Guggenheim Memorial Foundation, as well as grants from the Illinois Arts Council, the Commonwealth of Pennsylvania, and the Pennsylvania Council on the Arts.

Editor’s Note: Because it has been three years since my father died. Because three years ago, Li-Young Lee’s Rose was the labyrinth I walked to access my grief. Because “Truth is, I’ve not seen my father / since he died.” And while rereading this collection forces me to confront this reality, it also reminds me that “if there is love there is / no forgetting.”